Origin of primary ingredient, go-ahead from Brussels to Italian sounding 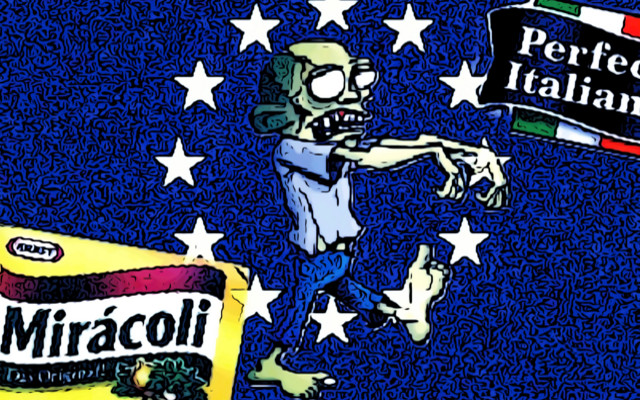 On the origin of primary ingredient, Brussels confirms the go-ahead on Italian sounding. With the support of Gentiloni’s government and those agricultural confederations supporting it.

Reg. EU No. 1169/11 introduced the requirement to mention the origin or provenance of the primary ingredient (>50%), when it doesn’t match the stated ‘Made in’. That is to say, the country where the product has undergone it last substantial transformation, of which there is evidence on the label and/or advertisement. (1)

The European Commission has been delegated to enact an implementing Regulation, (2) as to define how to apply the above rule. After seven years, the Brussels institution has finally adopted the act, which betrays either consumers’ confidence, and the mandate received by the European legislator.

Italian sounding, as French sounding and others will have their coast clear, thanks to the exemptions that Commissioner Vytenis Andriukaitis has proposed, and that almost all governments of Member States have approved. (2)

It will be enough to insert the geographical suggestions inside the registered trademark, or in a PGI (Protected Geographical Indication), to benefit from the derogation. And to continue to hide that the primary ingredient origin comes from somewhere else entirely.

Dairy products and cheeses made from milk and curds that have a distant provenance, ham and sausages from foreign countries, pasta with Canadian wheat, Asian rice? By just placing a flag in the brand, the consumer will be deprived of the possibility to distinguish the local food chains from the globalized ones. (3)

Indeed, the derogation will be extended to ‘geographical terms including customary and generic names, where such terms literally indicate the origin, however there common understanding of them does not identify with the place of origin or provenance’.  Any possible for of Italian sounding, or the French one, is thus explicitly legitimized.

Coldiretti (the leading farmers’ organization in Italy) is now complaining, at done deed, of the European Commission’s Regulation that betrays the ‘Made in Italy’ in favor of ‘Italian sounding’. But Gentiloni’s government- always supported by Coldiretti – has voted in favor of such Regulation. Rather than demanding from Brussels the compliance with the received mandate from the European legislator, which did not include any derogation.

The unspoken truth refers to the Italian decrees on the mandatory origin of raw materials on pasta, rice and tomatoes labels. Decrees of which the Ministers Maurizio Martina and Carlo Calenda have planned obsolescence, and will lose their effectiveness starting from the date of entry into force of the European regulation in question. (4) Shame!

Made in Italy and Italian sounding, what to do?

To the Italian government that is to be, the only chance to repair the damage of their predecessors lies in the opportunity of bringing the case in front of the European Court of Justice. To report the failure to comply with the delegate that the European legislator has mandated to the Commission. Which should have been confined to just implementing the simple rule introduced in the Food Information Regulation above, (5) without the possibility to introduce any derogation of the sort.

The following steps are two.

Impose rigor in official public controls on food products that by any mean – through wording or graphics, even if contained in the logo brand – may suggest an untruthful origin. In all cases in which the consumer may be misled on the actual origin of the products (meaning the place of their last substantial transformation), must in fact be specified. (6)

Introduce the requirement to place the origin of meat in restaurants. The consumer has a right to know the origin of meat, fish and derived products even when eating out (cafeterias, restaurants and diners, fast-food, take-away). All the more since meals outside the house, in Europe, represent a good 50%. (7)

(2) Germany and Luxembourg are the only two governments that abstained from the vote on the draft Regulation, finding it ‘too restrictive’ (!)

(3) For examples on the different cases that can be put forward and the norms to be applied, see the following article https://www.greatitalianfoodtrade.it/en/labels/origin-of-primary-ingredient-winners-and-losers

(6) Refer to Regulation EU No. 1169/1, art. 26 2.a. Rule already in force, without the need of any act of implementation on behalf of the traitors in Brussels. It is the for example of the tricolor brand ‘Miràcoli’ by Kraft Foods, widely used throughout Europe on pasta and other Italian sounding products that are produced in Germany but only reports on the label the misleading wording ‘Made in EU’

(7) The paradox is represented by the fact that European consumers have been recognized the right, starting from 18 years ago, to know the country of birth, rearing and slaughter of retailed beef and veal. Without however, receiving any news on the meat sold to the general public (Reg. EC No. 1760/00)

Free from, the ABC’s