EDITORIAL. TTIP, no thanks! The reasons for our (op)position 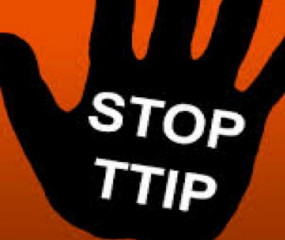 The petition of European citizens against the approval of a ‘muscular’ treaty with uncertain boundaries had more than 1.7 million signatures. Why?

The Treaty can possibly be of benefit to the heavy industry, the mechanical engineering industry in particular. But to be recognized as such, to ensure that the WTO accept the adoption of preferential tariffs than those applied to all States Parties, one cannot help but include agriculture.

Yet, in my humble opinion it is very dangerous to break down the barriers between the US and the EU in the agri-food sector, for several reasons.

In Europe, it is 236 times easier to die because of influenza than for food poisoning. In the US, food-borne diseases affect every year on average one out of 6. It is no coincidence, the regimes for the protection of food safety are very different, and the reform launched by Obama (the Food Safety Modernization Act), the first structural reform of the Food Law after 72 years, is however lacking in resources for official public supervisions.

– Synthetic hormones in meat. Estrogen, steroids. What are the risks to the health of consumers?

– Cloning of livestock, missing traceability. A question of bio-ethics that might well affect the safety of food for consumers (lack of information on long-term effects) and animal welfare. Yet, in the US the traceability of the animal supply chains is not mandatory if cloning has been utilized

– Chlorinated chickens. Rather than taking action on the prevention of contamination by pathogenic bacteria such as Salmonella, by applying good hygiene practices on farms, in the United States the intervention is from the bottom up, decontaminating poultry meat by washing it with powerful disinfectants. What are the risks for consumers?

– GMO and glyphosate. The carcinogenic pesticide – besides being an endocrine disrupter – is widely used on American crops, it pollutes the groundwater and maintains residues on soybeans and corn in particular. In the US they lack the traceability and labeling of GMOs, contamination of non-GMO and organic fields is high. Better to refer to the production of neighboring Russia, where GMOs are strictly prohibited

In view of the strict rules laid down in Europe to guarantee animal welfare, in the US farms are intensive, the animals are crowded into meager spaces and systematically and abundantly treated with veterinary drugs, hormones but also antibiotics to prevent diseases before slaughtering.

4) MADE IN ITALY, PDO AND COUNTERFEITING

– Where does this mash come from? In Europe, the origin of meat, already mandatory for bovine meat since 2000, has been extended to pigs, sheep, goats and poultry, as of 1 April 2015 (reg. EU 1337/2013). But it is not mandatory for meat preparations, such as burgers and sausages. Where do and where will the mashes of mechanically separated meat arrive from? It is not known nor will it be.

– Made in … Where? In the US, on the other hand, it is not even a requirement to indicate the country of origin of food, it is enough to indicate the name and address of the distributor. Therefore it is essential that Italy reintroduces the obligation to indicate on the label the location of the manufacturing facility, the only legal guarantee which can allow global consumers to distinguish the real Made in Italy from c.d. Italian sounding. Let’s all sign the petition on the homepage of Great Italian Food Trade!

– Bologna, the fake mortadella with mechanically recovered meat, Parmesello, Provolino and mozzarella with cellulose, Italian pasta with two inches of additives. The US industrial giants are the first Italian counterfeiters of food, from our PDO, that produce on an even greater scale than the original and distribute all over the planet. Not to mention that in the world there are those who still believe that pizza is a typical North American product…

– The gigantic Made in the USA productions carry out economies of scale, thanks to the substantial absence of rules ensuring safety and quality, they can destroy the European market which is still structured on the production of micro, small and medium enterprises linked to the territories and their productive traditions , whose costs are much higher thanks to a strict set of rules protecting the safety and quality of food, guarded by a capillary system of official public, health and veterinary supervisions.

It is no coincidence that in fact food poisoning cases are very rare in Europe whereas common in the USA. To compete, at what cost, and why?