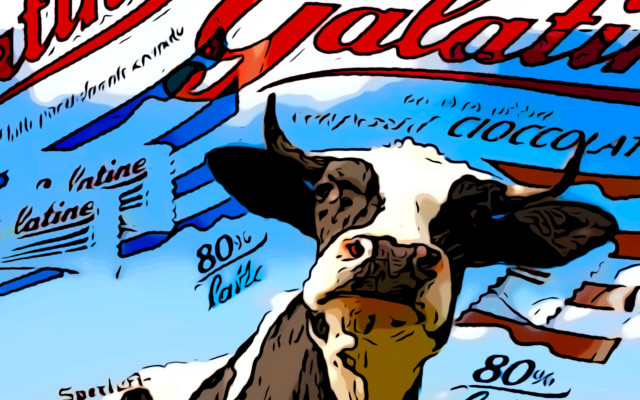 ‘Galatine’ candies, 80% milk? That’s false! The IAP, the Italian Advertising Council Institute, has finally taken the hint by Great Italian Food Trade and imposed on the Sperlari brand (1) to modify its deceitful advertising.

Great Italian Food Trade has reported to IAP, in August 2017, the deceitful advertising of Galatine sweets.

Which is based on some clearly false messages:

– ‘Fresh milk’? False! Galatine candies do not contain milk, rather powdered milk. A product that differs either in its nature and nutritional properties, surely not comparable to fresh milk. As confirmed by the consumers’ association AltroConsumo and the Italian Institute for Research on Nutrition Cra-Nut,

– ‘80% milk’? No way! The deceit begins with the false declaration of equivalence between 40% of powdered milk, in the white Galatine sweets, and 80% of milk. Though 80 is also referenced in the cocoa Galatine, which contain only 33% of powder (so, by applying the equation 1 gram of powder = 2 grams of liquid, should rather mention 66%),

-‘Only all-natural and good ingredients’ ? Lie! 55% of Galatine sweets is composed by sugar and glucose syrup. Upon which a lot can be written, for the good and bad, as long as it attaches a hypothetical ‘naturalness’. (2) Let alone powdered milk, carried by road from who knows where after having undergone a process of concentration – who knows when – which has radically altered its characteristics.

The Control Committee for the Advertising Council Institute (IAP), ‘in conclusion of the overall procedure, has asked the advertiser proof of the accuracy of the ‘80% milk’ and ‘simple taste with all natural ingredients’ claims, provided on the packaging of Galatine products and on the pages of their website’.

The IAP, ‘in the light of the findings, has asked and finally obtained by the advertiser a modification of the claims, given that (…) ‘fresh milk’ cannot be considered as an ‘ingredient’ of the candy full stop. Its presentation in percentage, through an articulated mathematical construction, can prove to be potentially ambiguous’. An euphemism.

And it’s Milk Sounding – that is to say, the misleading evocation of milk on foodstuff that have little or nothing to do with milk – the broader context where the Galatine affair takes place.

The ‘Milk Slices’ (‘Fettine di Latte’) is another case already submitted by us to the IAP, which has ordered to remove all references to the sole Italian origin of milk. Unfortunately overlooking the most serious misconduct, the reference of milk in general in the cheese slices. Branded Inalpi, already known for its false Alpine milk on which case the leading farmers’ association Coldiretti has maintained unprecedented secrecy. (3)

Sangemini water is another case, where a bottle of mineral water – in complete disregard of the rules on nutrition & health claims (4) – is compared to a cup of milk. Not to mention the ‘Panini al latte’ (lit. Milk-bread rolls) by Morato Pane and Conad, that show a glass of the wholesome liquid but are instead made of the powdered kind with unknown origin.

The Italian Competition Authority, Antitrust, received a complaint – on 11.3.17, by Great Italian Food Trade – on the above mentioned unfair commercial practices named as Milk Sounding.

The dossier has been handed to the directorate-general for consumer protection of the Authority, which by 5.2.18 – within 180 days from the date of receipt of our report – will decide whether to launch an investigation or not. (5) Since it is endowed with an unparalleled arbitrariness, entailing no intervention obligations not even with the assumption of a flagrant breach of law as the ones reported. (6)

Impunity of these giants that keep blatantly breaking the rules is what strikes and saddens the most, the ones so passionate about food law and consumer protection as they state. Where are the authorities responsible for public oversight? And the public prosecutors?

Cases of flagrant commercial fraud, – food fraud or whatever, like the one of the Galatine sweets of the false alpine milk but also others, that concern melted cheese (still Inalpi, joined by Galbani and Mondelez, Cheese Scam, see note 1) – must be halted.

PS: on Amazon all mandatory information is missing (7) also when concerning Galatine candies. But that’s a different story, awaiting on both the Italian Antitrust Authority and the official public authority‘s intervention.

(1) Sperlari, already owned by the Swedish group Cloetta, has been bought in 2017 by the German group Katjes International. The deceitful advertising reported by Great Italian Food Trade has moreover continued with frequency, not just in Italy but all around the world. With the blessing of the so-called Corporate Social Responsibility (CSR), that many large industrial groups certify and declare on sizeable reports, only to defraud the consumers in clear violation of the mandatory rules. As for this and many other cases, which include the ones on Cheese Scam brought forth by Inalpi, Mondelez and Galbani-Lactalis. In this regard, see the article https://www.greatitalianfoodtrade.it/en/labels/cheese-scam-fraud-in-slices

(2) On the notion of ‘natural ingredient’, valuable suggestions are offered by the Food Standards Agency (UK), on https://www.food.gov.uk/northern-ireland/niregulation/niguidancenotes/fresh-pure-natural-ni

(3) It may be a coincidence, but Inalpi is associated with Coldiretti Cuneo, of which Roberto Moncalvo will become special commissioner, after the prestigious assignment at the national presidency. The fraud carried out by Inalpi clearly damages dairy producers made with real alpine milk, but the majority remains silent and defenseless. Ubi maior, minor cessat. It may be another coincidence but the Fraud Repression, so far active on the Inalpi case, is subject to the political direction of another Cuneo native, the outgoing v.minister of Agricultural policy, Andrea Olivero

(6) Except the duty to report punishable offences – such as commercial fraud – of which public officials and public service operators become aware of ‘in the period or due to their functions or services’ (code of criminal procedure, Article 331)

No cane sugar in wine. A EU ban is needed