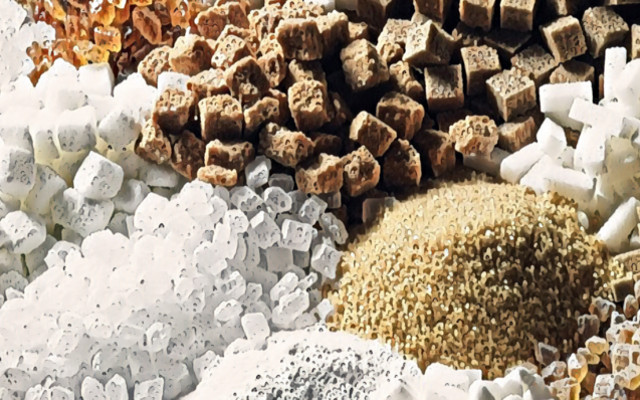 There are a dozen sugars that we usually consume. To distinguish them is not only the sweetness

The term 'sugar' is commonly associated with sucrose. Whether it is beet or cane sugar, more or less refined, it is always sucrose. But the sugars present in our foods are at least a dozen.

The sweetness of simple sugars

The sweet taste is typical of simple sugars, which unlike complex ones are quickly absorbed by the body. They are distinguished in

- monosaccharides, such as glucose and fructose,

- oligosaccharides, such as sucrose, lactose and maltose.

All simple sugars provide 4 kcal per gram. On the other hand, the sweetening power (greater or less than that of sucrose, to which the value 1 is attributed) and the glycemic index vary.

Unlike the sweeteners, classified as additives e so labeled, sugars are real foods. They therefore appear with their name in the ingredients list of foods, where they are entered as ingredients.

- most used sugars from the food industry are a dozen. Knowing its characteristics can help you understand the value of the product and make informed purchasing decisions. These include some products rarely offered on retail shelves, but often found in packaged foods. This is the case with HFCS corn syrup, High-Fructose Corn Syrup, indicated by some scientific researches as favoring obesity as well as object in the USA of a tough legal battle between the sugar industry and the corn industry.

Regarding the sweetening power, the sugars that come closest to the level of sucrose (refined white or cane sugar) are coconut sugar, agave syrup and apple sugar. On the other hand, fructose is much sweeter. The reason for this discrepancy is easily understood by crossing the two factors - the sugar composition and the purity in sugars, which also determine the caloric value of each sugar.

Sweeteners, a world of additives

Sorbitol and other polyols, the bulk sweeteners