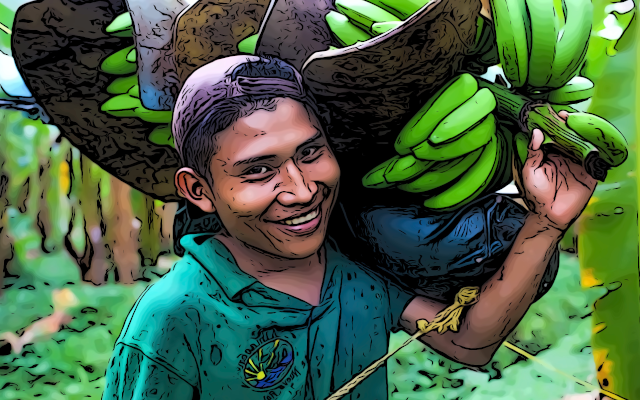 Nova Coop organized a public meeting in Turin with Edwin Melo Proano, the president of the Ecuadorian cooperative of small producers The Guabo, which has been supplying 'Solidal' brand bananas in Coop stores for 10 years. (1) The event was held in the Turin context of two weeks dedicated to fair trade.

Bananas grown by The Guabo in Ecuador they represent well the added value of 'Fairtrade' certified foods. This system, as seen, guarantees farmers a stable minimum price, indifferent to market fluctuations and suitable for covering average production costs. The 'minimum Fairtrade price', in fact.

The 'premium fund' it is the second element of solidarity, which must be achieved through the direct support of shared projects for the benefit of the local community. In the case of The Guabo, cooperation has helped both the development of agricultural production and the life of the community with specific interventions on education and health.

The cooperative The Guabo now it gathers 130 members and 1200 direct workers. A community of small producers that supplies bananas - organic and from integrated pest management - directly to consumer cooperations in Italy, without intermediaries.

Consumers 'fair and supportive' they receive from Coop the opportunity to win a prize by participating in a competition open until 30.10.19. To participate, just buy any product from the 'Solidal' line, take a picture of the product against the backdrop of a landscape and register on the site ilviaggiochesei.it.

In addition to various awards With a daily draw, a 1 week trip for 2 people to the Dominican Republic is up for grabs. Guests of the 'Conacado' Cooperative, which produces Fairtrade certified cocoa also used in Coop products.

(1) Nova Coop is one of the 7 large consumer cooperatives of the Coop system, and as such belongs to the ANCC of the National League of Cooperatives and Mutuals and to the Coop Italia cooperative consortium.

The food consumption of Italians in the Immagino Observatory