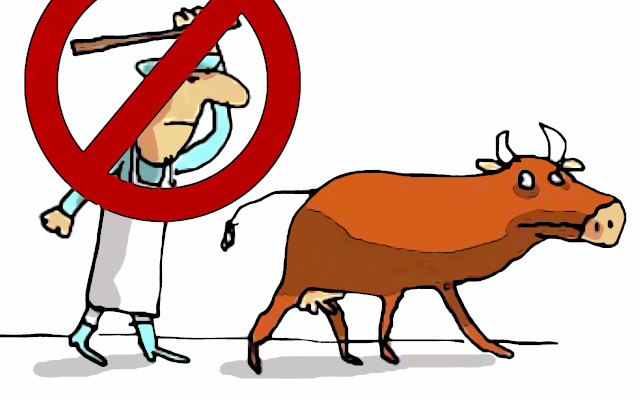 Animal welfare can - indeed must - also be improved in all stages, subsequent to breeding, which lead the cattle to the slaughterhouse. And the minimization of bad debts depends, in almost all cases, on the competence of the staff. This is what EFSA states in its opinion 'Welfare of cattle at slaughter', published on 3.11.20. (1) An analysis of status quo and perspectives, to follow.

La European Food Safety Authority identifies 40 risk factors for the welfare of cattle at the slaughterhouse. 39 of the 40 possible causes of suffering are attributed to the inadequacy of personnel, due to technical inability and excessive fatigue. Only one due to the incorrect design of the structure.

The detailed analysis it affects all phases of human activity, from the arrival of the cattle to the slaughterhouse to their dissection. The EFSA opinion in question does not consider the transport of animals from farms to slaughterhouses, to which an update report of the previous evaluations will be dedicated (see next paragraph EFSA and animal welfare, work in progress).

The issues to be addressed

Bad management of the activities examined can lead to 12 negative consequences on animal welfare. Hot and cold stress, fatigue, prolonged thirst, prolonged hunger in the first place. But also the impediment and limitation of movement, problems with rest, social stress, pain, fear and anguish. EFSA therefore recommends that a number of measures be taken to prevent any unnecessary suffering in the animals at the slaughterhouse. The ABC, in a nutshell.

A) Acceptance at the slaughterhouse

Starting from the arrival of the cattle at the plant, the workers must check the health conditions of the animals, taking into account that the appearance of those visible from the outside of the vehicle is certainly better than those inside.

'Cattle they should be unloaded as soon as possible and those with severe pain, signs of disease or those who cannot move on their own should be inspected and an emergency slaughter procedure applied immediately. ' (1)

B) Parking and travel

In the parking phase EFSA recommends attention to basic measures. First of all, ensure access to water, adequate space for movement and protection from adverse weather conditions.

The same care it must be placed in the phases of movement inside the slaughterhouse. In the final stage 'methods of restraint, stunning and slaughter which cause severe pain and fear should not be used'.

'Slaughter without stunning should not be practiced. (...) Pre-cut stunning is the only preventive measure for the welfare consequences connected with cutting ' (Welfare of cattle at slaughter, EFSA opinion, 3.11.20).

The stunning - nowadays excluded from ritual slaughter, including in the EU - is considered essential by EFSA to prevent suffering when animals are killed. And in any case, attention must be paid both in the containment phase that precedes it, and in its execution which must be immediate and effectively suitable to induce the state of unconsciousness.

The report under consideration follows the precedents on animal welfare to the slaughter of poultry (2019), rabbits (January 2020) and pigs (June 2020). In July 2020, the European Commission asked EFSA for further advice on welfare during transport and welfare of pigs (by June 2022), welfare of broilers and laying hens (December 2022), welfare of calves (March 2023). (2)

The authority it will also have to update the different opinions on the welfare of different animal species during transport. And contribute to the updating of shared practices in the field of GOOSE (World Animal Health), which the opinion in question already exceeds in underlining the due attention to:

- use of painful stimuli to move animals,

- slaughter without stunning (see above).

Starting from 14.12.19 food that comes from abused animals - that is, subjected to conditions incompatible not only with EU rules on animal health, recently reformed, but also with those on animal welfare - they qualify as 'food at risk' (EU regulation 2017/625, art.3.24). And they must therefore be withdrawn from the market, as prescribed by the General Food Law (EC regulation 178/02, article 19).

European Commission, from words to deeds

The European Commission presented the strategy Farm to Fork, 20.5.20. A broad and redundant document of good intentions, proposed at the same time as the EU Strategy on Biodiversity, after European Green Deal (announced on 11.12.19).

From words to deeds, the EU animal welfare reform program has been postponed for at least 2 years. Despite the European Court of Auditors, in its own special report onanimal welfare (2018), had reported serious shortcomings with respect to the minimum standards defined by the OIE. The three aforementioned strategies, meanwhile, have been denied in the CAP reform 2021-2027. What to expect then?

The role of consumers

THE CONSUMERS they are in fact the only ones who can impose the improvement of animal welfare, through very specific choices. Assuming the great respect of those who embrace vegetarian and vegan choices, some advice is offered to those who keep products of animal origin in their diet:

- less but better. Vegetable proteins are suitable to meet the nutritional needs of each, as seen. Meat consumption can therefore be reduced, but it is necessary to choose sustainable products that respect animal welfare, as well as quality. Which, logically, have higher prices,

- 'without antibiotics', at the top of the list. Non-use of antibiotics is the first sign of good animal health. Italy is the first country in the world to have adopted breeding strategies - see the Algatan model - able to strengthen animals to the point of being able to minimize and even avoid the use of antibiotics. The 'antibiotic-free' products (meat, eggs, farmed fish) are more and more present on the shelf and they deserve to be privileged both to reward virtuous animal husbandry and to reduce the risks of antibiotic resistance,

- bio. Animals raised organically are themselves subject to a set of rules which guarantee its well-being,

- local foods. The mandatory indications of origin on the labels of almost all meat (excluding horse and rabbit, as well as 'meat preparations') make it possible to make an equally important choice. Animals raised and slaughtered in the same country were subjected to shorter transport and less stress.

- Italian supply chain. The European Federation of Trade Unions in the Food, Agriculture and Tourism Sectors (EFFAT), in its own report 25.6.20, highlighted the exploitation of workers in the meat industries of Germany (first producer in the EU), Poland and the Netherlands. A recent report from government authorities showed instead widespread fraud on the traceability of meat in France. Choosing Italian meats means placing trust in the veterinary system of official controls that excels at a global level, as well as contributing to the national GDP.

On hold that the European legislator introduces the reforms expected for years, two fundamental steps forward are expected:

- cameras in slaughterhouses. England introduced by law the obligation to use CCTV systems in all slaughterhouses. Coop Italia is asking its suppliers to do the same. It is time to proceed, perhaps even with a specific national standard.

(4) We appreciate the sincerity of Andrea Gavinelli (Head of Unit G3, DG Sante, European Commission) who, in his presentation 'Animal welfare within the Farm to Fork strategy', in turn casts doubt on the measures that can actually be adopted. See slide 11, Main point of reflection, its https://ec.europa.eu/food/sites/food/files/animals/docs/aw_platform_20200615_pres-02.pdf

Official controls on veterinary drugs and their residues, reg. EU 2022/1644