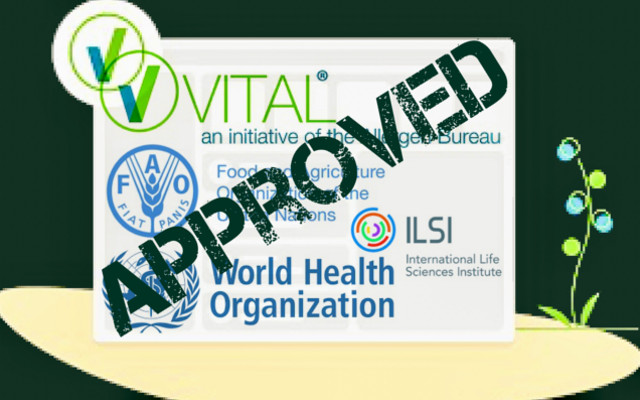 The ongoing scandal on the Kafkaesque management of cases of impurities with peanut residues in soy lecithin arriving from India offers an opportunity to take stock of the analysis of the risk of allergens in food products. Unfortunately, as we have seen, a subject unknown to the 'blame' clan of Eurocrats and bureaucrats. (1)

The most important scientific literature on the subject has already been reported in the previous article to which reference is made. (2) We now focus on the approach to risk analysis developed by Allergen Bureau with the Vital® 3.0 system. Validated among others, as will be seen, by FAO, WHO and ILSI.

Vital® 3.0, the reference system for the analysis of allergen risk in food products

Vital® 3.0 (Voluntary Incidental Trace Allergen Labeling) is a system for analyzing the risk of allergens in food products which is structured as follows:

i) identification of Reference Dose, based on the Eliciting Dose ED01 and / or ED05. Which derive from the modeling of data collected and updated thanks to clinical studies (Oral Food Challenges, OFCs). In order to predict the proportion of the allergic population that could react to increasing doses of individual allergens, (3)

ii) analysis and / or mathematical simulation of the levels of allergens contained in the individual food matrices, based on the levels of accidental contamination of their ingredients. Using as a parameter the mg of total protein of the allergen in the food intended for consumption,

iii) comparison of Reference Dose with the mg of allergenic proteins in the products under investigation, calculation of exposure margins (MoE, Margin of Exposure) of allergic consumers, definition of the actions to be taken for risk management (Action Level).

FAO, WHO and ILSI confirm the Vital® 3.0 approach

Scientific consultations organized by FAO and WHO (2021. See note 4) and the guidelines for the practical management of allergen risk published in June 2022 by ILSI (International Life Sciences Institute. See note 5) converge in confirming the validity of the approach adopted by Allergen Bureau in the Vital® 3.0 system.

The Vital® 3.0 system it was used in both works as the first example of a quantitative risk assessment system for the main allergens, among the various systems considered. FAO and WHO have in fact declared the best applicability of a system based on the principles of 'Benchmark Dose'(without even needing to apply the MoE) and'Probabilistic Hazard Assessment approach'.

Vital® 3.0, a guarantee of protection for allergic consumers

The values ​​of EDp (population minimal eliciting dose) identified by Vital® 3.0 (2019) have been considered by FAO, WHO and ILSI to be entirely suitable for preventing the underestimation of the probability of allergic reactions. Noting that any reactions observed were never severe, but only mild or moderate.

FAO and WHOin particular, they found the ED values ​​of Vital® 3.0 to be widely demonstrated for their ability to protect against the risk of allergic reactions to peanuts. Following specific confirmations from the committees of experts, including researchers from Federal Agency for the Safety of the Food Chain (FASFC, Belgium).

Le scientific review conducted by FAO, WHO and ILSI - after examining the data on the evidence of anaphylactic reactions and those relating to allergic reactions (to ED01, ED05, ED10) - reached the following conclusions:

i) all symptoms up to ED05 are mild or moderate,

ii) up to 5% of reactions in ED01 and ED05 can be classified as anaphylaxis (according to the definition of World Allergy Organization), but none of those found were serious.

The FAO / WHO commission in fact, he observed the extreme rarity of fatal anaphylaxis (1 in 100.000 people / year, in the allergic population). Noting that none of these fatal reactions were associated with exposure at doses equal to or below the 'Reference Dose'identified by Vital® 3.0.

The objective food safety with respect to allergens is defined by FAO, WHO as'to minimise, to a point where further refinement does not meaningfully reduce health impact, the probability of any clinically relevant objective allergic response, as defined by dose distribution modeling of minimum eliciting doses (MEDs) and supported by data regarding severity of symptoms in the likely range of envisioned Reference Doses (RfD)'.

This goal can be reached, FAO, WHO and ILSI, by following the example of Vital® 3.0:

- starting from an ED05 for the definition of theReference Dose'(indicated in 2 mg of total protein) which corresponds to the rounding without decimal points of that identified by Vital® 3.0 (2,0 mg),

- express the analytical results of the evaluation in terms of mg of total protein of the allergenic food / kg of food product, to ensure a standard in the interpretation of the results and theAction Level.

A greater risk it has been confirmed in foods where the ingredient with allergen residues is present at a very high altitude - eg. mustard in pasta, a story covered up by the Ministry of Health in 2021 (6) - compared to those where the inclusion is minimal (eg food additives such as soy lecithin, emulsifying additive E 322). Arithmetic is, after all, an exact science: 10 ppm (part per million) of allergenic protein in an additive used in 0,1% corresponds to 10 ppb (parts per million) in the final food. Zero risk.

Another aspect of possible importance is the distribution of the allergen in the product, divided into 'particulate' is 'non-particulate matter'. The first consists in the inclusion in a coarse form (eg a peanut seed), visible to the naked eye, while the second is neither visible nor separable. The second form ('non-particulate matter') is considered by VITAL® 3.0 as'readily dispersible'and presents less complexities of analytical identification, compared to'particulate'.

Both publications, FAO / WHO and ILSI, recommend to the scientific community to develop more precise analytical criteria in several respects:

- improve sampling and handling of samples from collection to the laboratory.

Strong criticalities potentials were found by ILSI in the ELISA method (Enzyme-Linked Immunosorbent Assay), an immunoenzymatic technique designed to identify and measure the presence of allergenic proteins). There cross-reaction between similar proteins - just like those of peanuts and soy - can in fact lead to false positives.

The use of proteins marker specifications in the ELISA system, on the other hand, can create complexities that today do not seem to guarantee the absolute effectiveness of the system in complex food matrices, especially due to the aforementioned false positives issue.

La cross-reactivity it is one of the most serious problems that ILSI suggests to investigate case by case, through validation in-house of the method (however subject to accreditation). Without neglecting the correct calibration of the ELISA, which in turn is important to avoid obtaining non-compliant results.

PCR methods (Polymerase chain reaction) - historically used for the analysis of GMO residues in soybeans - amplify the sequences of DNA segments. They are considered specific, sensitive, qualitative and quantitative (in the cases of qPCR and Real Time PCR).

The advantage of PCR methods compared to ELISA is the ability to identify DNA which - in cases of matrices subjected to technological processes (such as processed foods, e.g. soy lecithin) - tends to resist better than just proteins (instead identified by ELISA) .

Attention, in the PCR method, it must be dedicated to the amplification levels (which can lead to false positives, when exasperated. Eg> 50, in soy lecithin) and to the DNA sequence used for amplification, which must be highly specific. (7)

Risk analysis allergens on food products is indispensable and necessary in both phases of self-control - in order to ensure correct information for allergic consumers, also with regard to PAL (Precautionary Allergens Labeling. See notes 8,9) - and for the management of possible non-conformities related to impurities and / or cross-contamination.

The culture of food safety it cannot ignore the knowledge of how to analyze, prevent and mitigate risks. The Vital® 3.0 system is today the international reference standard for the analysis and management of risks related to the possible presence of allergens in food products and should be used by both operators and authorities.

(3) The so-called Eliciting Dose (ED, or reaction dose) is the dose of allergen that causes the appearance of symptoms in allergic subjects. The Oral Food Challenge (OFC) are instead the diagnostic tests of food allergies conducted through controlled administration of increasing doses of the suspected allergens

(4) FAO / WHO (2021). Summary report of the Ad hoc Joint FAO / WHO Expert Consultation on Risk Assessment of Food Allergens. Part 2: Review and establish threshold levels in foods of the priority allergens. https://bit.ly/3OZjnGj

The same Office 8 DGISAN of the Ministry of Health which in the case of Indian soy lecithin denied its responsibility for risk analysis (see note 1), however, decided to tackle the case of mustard contamination of pasta in a very different way:

- sampling and sweep analysis were not ordered on the Italian territory, although the conditions were met, so as not to extend the alert in the RASFF system (see article Mustard alert in wheat. The recall is necessary and urgent),

- no withdrawals and recalls were ordered, nor the re-labeling of foods potentially dangerous for allergic consumers, as required. And instead a collective information has been agreed 'on the shelf', measure not provided for by reg. CE 178/02 (art. 19) nor suitable for informing those who have already purchased contaminated food at levels that the health authorities have been careful not to verify.

Who writes, alongside Food Allergy Italy, publicly denounced this shameful management of a concrete risk of food security which thank goodness did not cause deaths (unless the deaths were attributed to Covid, according to the customs of the time). See the article Wheat mustard allergen alert, Ministry of Health circular. Analyses,

(7) In both methods of analysis, PCR and ELISA, it is also important to identify an appropriate conversion factor from allergen to allergen protein. To ensure correct application of assessment systems such as Vital® 3.0 or even the Contamination estimate calculator of TNO, promoted in iFAAM European project,

Microplastics in pesticides, the CIEL report