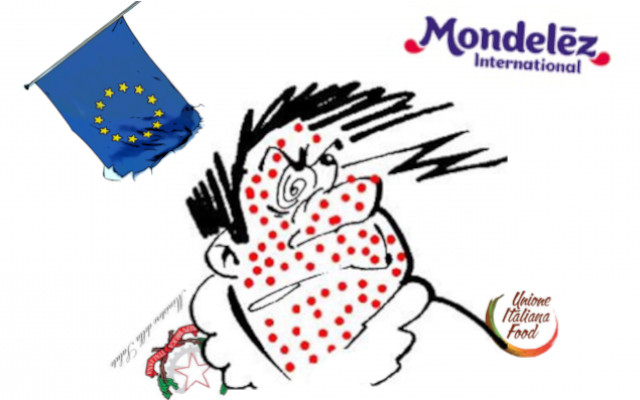 Mondeleaks - a 'position paper'of the giant Mondelez, received by our editorial staff - reveals serious anomalies in the management of the contamination of wheat flour and bakery products with the mustard allergen.

There is connivance between the large industrial groups and the Ministry of Health to omit the necessary alert notifications on unsafe foods. And the absence of European institutions in charge of risk analysis is confirmed cross contact with food allergens. (1)

Widespread mustard contamination wheat, semolina, flour and derivative products (pasta, bread, bakery products) emerged in Italy at least starting from the summer of 2021. Although its causes - use of mustard as a fungicide and in green manure, in addition to its association with other crops - could go back several years, as we have seen. (2)

The news contamination, already known to operators for some time, however, only emerged in November 2021. Thanks to an alert notification, in the RASFF system, substantially free of follow-up. (3) Until, in December 2021, the Ministry of Health ordered the suspension of official controls and decided to manage the alert in 'unusual' ways. (4)

'The Irish point of contact for the RASFF'- we read in the Mondeleaks document, but not also on the RASFF public website (Rapid Alert System on Food and Feed) which the European Commission manages - 'notified that wheat from Southern European countries, especially Italy, contains a high level of mustard and soy. '

The big players of the milling and pasta sectors, confectionery and bakery products - as well as the Italian Ministry of Health - have, however, kept silent about cross contamination of which they had precise knowledge, which in all probability involved tens of thousands of tons of food products. Before, during and after the European alert.

The history the story is described precisely in Mondeleaks:

The final recommendation of Italmopa to wheat flour producers was to label mustard in retail wheat flour and to provide information to B2B customers about the occasional contamination of wheat by mustard. '

'In October 2021, the Italian Food Union started conversations with the Authorities and associated companies', we still read on Mondeleaks.

'During one of the first meetings Barilla (producer of biscuits but also of pasta and owner of several mills) shared the overall results of his report: beyond 40% of durum wheat samples and the 15% of those of soft wheat tested positive for mustard.

They shared the intention to immediately label the pasta (durum wheat) with the warning of the presence of mustard, printing the information in inkjet in the shelf-life box on the package. They also said they don't see the urgency for cookies and crackers (soft wheat). '

The Mondelez factory of Capriata d'Orba (Alessandria, Italy) uses several suppliers of products, based on Italian wheat, made in Italy. Some of these 'they have already stated their intention to label mustard', as reported in the'Position Paper Mustard & Agricultural Comingling'by Mondelez International. In some cases, results of 'positive results' with the methods of analysis PCR and ELISA.

Other suppliers of wheat flour, despite sharing the negative results of their mustard monitoring program, would have been warned by their customers to 'positive results on wheat flour delivered from their mills. In the consumer database', reports the Research Fellow in the area Food Safety di Mondelez Europe GmBH, UK
branch, ‘There have been no reported cases of reaction to mustard in at least the past 3 years'.

Considering the data on the dose distribution of VITAL 3.0, (6) this could trigger reactions in 20% of subjects allergic to mustard.

From the data provided by the MDLZ wheat flour supplier', on the other hand, 'the vast majority of wheat flour samples tested gave negative results for mustard (ELISA and PCR). '

The big gamble is therefore premeditated on a scientific basis. (6)

Lo Science Fellow by Mondelez clearly recalls allergic reactions to mustard. Which include

- 'These symptoms are considered moderate to severe (Brown, 2004). The other Canadian report concerned a single case. A 50-year-old woman had a history of anaphylactic-type reactions after exposure to mustard (Connors et al., 2006)'.

The omertà is the leitmotif of Mondeleaks. In spite of the duties of immediate notification of unsafe foods to health authorities and consumers, (3) Mondelez silently decides which approach to take:

- 'risk assessment, supported by an analysis program, or

- mustard labeling (due to new information from suppliers). '

The industrial giant does not think in terms of food security but of opportunities:

- 'the risk assessment will require resources to perform the analysis, will add complexity in the management of warehouses and releases (of materials and products) in plants and / or at suppliers,

- the labeling will require changes to specifications and a plan to (gradually) change food labels,

- intermediate positions will be needed (e.g. statements, information on the Internet)'.

The Ministry of Health managed the food safety risk associated with systemic mustard contamination of wheat with tools that are not envisaged by the General Food Law, as the writer has already denounced. (4) And the European Commission - by failing to coordinate the good work of the Member States in crisis management (1) - has tolerated this serious offense.

Illicit of Rome and Brussels have thus stimulated further offenses, and as many risks for allergic consumers. As evidenced by what was noted on Mondeleaks on 25.1.22:

- 'Mondelez plants and their suppliers that use Italian wheat flour are affected by the problem (mainly the Italian plants, but some impact is also expected in other countries)

- we do not expect sampling by the Authorities in the near future (until the validation of the analysis method is completed, about 6 months). '

The cat is not there and the mice are dancing.

7) Allergens, the great chaos in Europe

The European Commission insists on omitting its duties to coordinate the analysis and management of public health risks associated with the cross contact from allergens. (1) Who writes, alongside European Food Allergy, has so far urged the Directorate-General DG SANTE and him in vain European Ombudsman so that EFSA is also consulted to confirm the suitability of the Vital 3.0 risk analysis system to protect the health of allergic consumers.

The shameful starvation of the European Commission can in any case be superseded by EFSA itself. To which we renew our appeal, recalling his duty to 'promote and coordinate the definition of uniform risk assessment methods in the areas of its competence'like the one under consideration. And it is in fact the Authority 'the recipient of messages passing through the rapid alert system, the content of which is analyzed in order to provide the Commission and the Member States with all the information necessary for the risk analysis'. (8)

7.1) Food safety, asymmetries in the EU

The asymmetries in the protection of food safety that derive from the lack of coordination of allergen risk analysis are well represented in the further notes of Mondeleaks, about the 'potential long-term implications'.

- 'This problem can spread to other EU countries and suppliers may raise the same concerns. A discussion is underway in Spain and one of the suppliers from Viana (Navarra, Soagna) has already asked to add mustard (and soy) to the Mondelez specification.

- The approach of the authorities in the Member States can be different. For example, some EU countries may accept the risk assessment and set an indicative value for chemicals. How to maintain consistency of labeling across the EU?

- The issue could also have an impact on other categories (eg pasta used in meals). And suppliers may dispute the MDLZ specification for soy labeling as well (supply chain contamination). '

The document that is attached to demonstrate the consequences of irresponsible management of food safety at all levels, public and private. The extremes can be seen:

- in Italy, for investigations into an association crime that also affects the managers of the Ministry of Health (failure to report, omission of official acts, abuse of office, trade in harmful food substances),

- in Europe, for a responsible action and a vibrant protest against the treacherous bread-eaters at the top of DG Sante who continue to trample on the rights of allergic consumers.