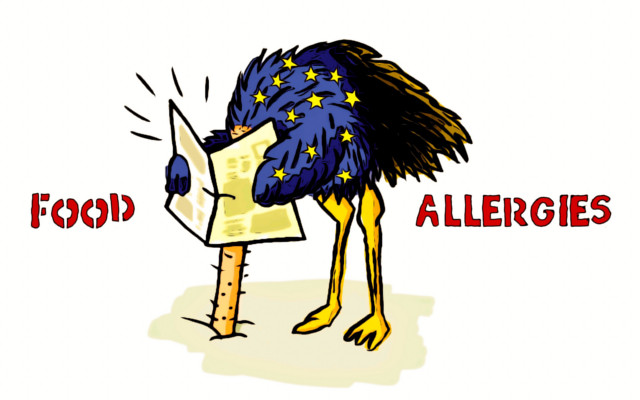 The RASFF alert linked to the presence of peanut residues in soy lecithin arriving from India - used in an infinitesimal share of millions of tons of food products (1) - offers a useful starting point to address an unresolved issue at EU level, the risk analysis of food contamination with allergens.

Lecithin is an emulsifier of natural origin derived from soy plant membranes which break during the extraction of oil from the seed. It has infinite applications in the food (emulsifying additive E 322), zootechnical, cosmetic, pharmaceutical, chemical and technical (agricultural, textile, construction, etc.) sectors. India is one of the first exporters of soy lecithin, as it is the only country to guarantee non-GMO products (unlike the USA, Brazil, Argentina). Indian industries exporting lecithins for use in food supply chains apply FSSC 22000 certified food safety management systems.

The Covid era and the discontinuity of supplies of commodities however, the resulting problems entailed, starting from 2021, serious supply problems for Indian oil mills. Which, in the face of the lack of soy, have shredded oilseeds of different nature in the same plants. And the objective difficulties of sanitizing the plants at 1000%, after each processing cycle, have caused the cross contact (accidental and / or technically unavoidable contamination) of soybean oils with protein residues from other seeds.

Soya oils and fats refined products - as well as natural tocopherols, vegetable oils derived from phytosterols, soy-based phytosterol esters and stanol esters produced from the latter - are also exempt from specific information obligations in relation to soy, as they are free of of its proteins. (2)

The news and the above considerations lead us to abstractly believe possible a widespread contamination of soy lecithin produced throughout India in the last 12 months, perhaps even in earlier periods, with the four commodities mentioned in the previous paragraph. Which are actually grown and marketed in that country.

No reaction allergic or otherwise adverse was reported in the files relating to the three RASFF notifications mentioned above. Which involved, it should be noted, 63 countries in the five continents. The probable absence of risks associated with the consumption of foods that contain an additive (E 322) contaminated with peanut residues thus finds a first empirical but not negligible confirmation.

All the more reason where we consider that:

- almost all food products containing soy lecithin distributed in Europe in the last two years could be affected by accidental contamination, precisely because its origin is almost exclusively Indian (except for the cases of foods labeled as GMOs, very rare in the Old Continent ),

- peanut allergy is prevalent and widespread worldwide, to the point of being considered by EFSA as'one of the most critical', especially in the young age groups. (5) Reasoning Conversely, if the risk had been real there would have been a real massacre. Instead, not a single case has been registered.

Il General Food Law, reg. CE 178/02, introduced the principle of risk analysis as the cornerstone of every political, legislative and administrative decision, as well as of the responsible choices of the operators during self-control and risk management.

Risk analysis safety of food products must consider concrete situations and not abstract cases, as can be seen from article 14 of the GFL which defines the prerequisites for activating the corrective actions referred to in article 19 below.

The risk da cross contact - in this case linked to the use of the soy lecithin additive with accidental contamination by peanut residues (or mustard, or sesame) - it must therefore be specifically verified on individual foods. And the mere observation of the presence, in an ingredient and / or additive, of some (or even a few tens of) ppm (mg / kg) of peanuts is neither sufficient nor suitable for the purpose. Instead, it is necessary:

- perform analyzes on final products intended for sale and / or administration to the final consumer. Using different methods (PCR and ELISA), to be repeated possibly in several laboratories to verify their reliability, in relation to the chosen sensitivity. Still waiting for an official harmonized method in the EU,

- classify the risk with scientific method. What is today (only) the VITAL® system (Voluntary Incidental Trace Allergen Labeling. Allergen Bureau. Version 3.0, 2019), developed by some of the world's leading food allergy experts and validated, among others, by German Federal Institute for Risk Assessment (BfR).

The total absence coordination between the authorities of the Member States and between them and the European Commission - which in the matter under examination limited itself to uncritically 'validating' the three notifications to RASFF, without even noting the heterogeneous classification of the risk of almost identical cases (6 ) - today it causes serious problems for all the supply chains involved in every situation of allergen risk analysis and management, from farm to fork:

- the national authorities participating in the European network of risk analysis apply protocols of lab tests (method, sensitivity) and evaluation and management criteria that are neither harmonized nor transparent. As seen in the recent case of the mustard alert in wheat, (7)

- regional and local health authorities in the 24 countries involved in the alert in question, on the sole basis of a (often unjustified) national alert, they are bound to adopt various measures that are independent of an effective risk analysis,

- the operators involved, tens of thousands in the EU, in turn groping in the dark in the absence of harmonized criteria on risk analysis (which must already be adopted in the self-check. See note 8). Also due to the uncoordinated interventions of the authorities,

- allergic consumers, some millions in the EU, are exposed to a redundancy of often unjustified alerts, which generate unnecessary stress and further reduce their food choices. Already unfairly limited by a reckless use and lacking in harmonized criteria of the so-called PAL (Precautionary Allergens Labeling). (9,10)

Ensure safety food and the health of vulnerable consumers is a pre-requisite for the production, distribution and administration of food products in the EU and in every country in the world. This prerequisite must also be respected in the management of the risk associated with involuntary contamination by allergens, which must be harmonized and consistent with EU regulations (EC regulation 178/02, articles 14 and 19).

It is not justified it is neither justifiable to take drastic corrective actions (withdrawal, recall), nor to impose the re-labeling of food just because, due to cross contact, may contain a few hundred parts per billion (e.g. 0,2 ppm = 200 ppb) of allergens. That is to say levels sometimes even lower than the LoDs (Level of Detection) of the analytical methods (except to amplify them up to levels that can compromise their reliability) and in any case harmless. (11)

The scientific community internationally, the associations of allergic patients and the more pragmatic authorities in risk analysis (eg BfR in Germany, FSA in the UK) have validated an approach in the analysis and management of allergen risk (inspired by VITAL 3.0) which obviously exceeds the mere analytical detection. Precisely because the risk, as clarified in the reg. EU 2017/625, expresses'a function of the probability and severity of an adverse effect on human health'. (12)

Allergic consumers, the operators of the supply chain and the authorities of the 27 Member States can no longer wait for a decisive intervention from the European Commission to unravel a skein which today, in the case of soy lecithin, also exposes, among other things, to risks of unjustified food waste and problems from food security. Against the current unavailability of raw materials guaranteed as 1000% free of traces of allergen DNA strands.

Alarmist news of unfounded alerts as they are based on false risk analyzes, as well as abuses of may contain on food labels, produce the opposite effect of lowering the guard in the vulnerable population which tends to resign themselves to taking on some risk (even potentially lethal in about 1% of people diagnosed with allergies) in order to continue living without falling prey of obsessions.

The European Commission must therefore:

- immediately review the inconsistent risk classifications proposed in the three alerts in question, the impact of which on the internal market is potentially enormous as we have seen (see supra, para. 3)

- take a transparent and responsible position on allergen risk analysis and management, in agreement with the Member States gathered in the PAFF Standing Committee (Plants, Animals, Food and Feed), so that identical criteria are adopted in the 27 countries and can be shared with the partner extra- EU,

- exercise the delegation conferred on it by the legislator (EU regulation 1169/11, article 36.3.a) to define detailed rules regarding the use of PAL (Precautionary Allergens Labeling). Type indications'may contain … (Allergen) 'must in any case follow a risk analysis of cross contact, in the self-control phase, inspired by the Vital 3.0 system of Allergens Bureau.

(4) The RASFF also refers to numerous other accidental contamination from peanut not declared on the label, in the last 2 years, on a wide variety of products (e.g. chocolate, rice cakes, protein bars, confectionery) where soy lecithin, perhaps not surprisingly, is usually used as an emulsifying additive (E 322)

(6) Paradoxically, Germany, where peanut residue levels in soy lecithin were higher, declassified the risk from 'serious' to 'undecided'. Where Italy - where peanut contamination was the lowest - insists on qualifying the risk as'serious', in defiance of any logic and motivation of the administrative act

(11) Precisely therefore 'information on the possible and unintentional presence in food of substances or products that cause allergies or intolerances'are framed, in Food Information Regulation, among the voluntary information on the label (EU regulation 1169/11, article 36.3.a). Unlike those relating to the deliberate use of allergens in the formulation and / or preparation of products (cit. Regulation, articles 9.1.c and 21)