Food delivery, the boom of meals at home 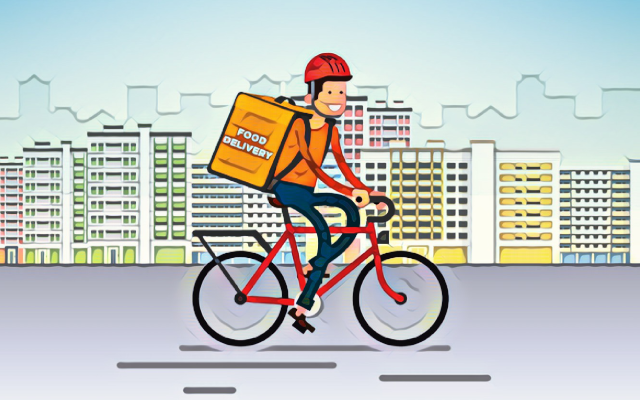 food delivery in Italy, the boom is overt. From 207 million euros in 2017 to 350 million in 2018, + 69%. (1) An innovative and highly appreciated service, albeit with some critical points, protagonist of dizzying growth.

In the beginning it was pizza home. To the sound of stickers on telephone booths, flyers on the windshields and in mailboxes, pizza Express dominated the scene of the food delivery for decades. And then, the digital miracle.

The arrival of food delivery in Italy it is quite recent. The first to land, in 2011, is the Danish Just Eat, followed in 2013 by prestofood.it and Mymenu. The turning point came in 2015, when Deliveroo, Foodora, Glovo, Moovenda, BacchetteForchette, CosaOrdino, Foodracers and Sgnam opened. In 2016 it is the turn of Uber Eats.

leaders undisputed of the Italian market is the English Deliveroo. Box-office champion also abroad. According to the Financial Times is among the European companies with the highest growth rate in 2017. From its foundation in 2013 to 2016, it would have recorded an annual turnover increase of 924%.

Charges and honors, some cases

The operators of food delivery withhold a fixed percentage on each order, which varies significantly depending on whether or not the delivery service is provided and in any case includes the presence of the restaurateur on the virtual showcase of the site.

'Just Eat, with whom we have been working for 6 years, retains 12%. They send us the orders and we process them by entrusting the delivery to our delivery man', explains Antonio Nofi de'The sea of ​​Terracina', one of the most popular clubs in South Rome - self-service and fish market - where to eat fresh fish at a good price. 'And thanks to the partnership with Just Eat', continues Antonio,'in 2018 our turnover grew by 20%'. Deliveroo and Glovo they retain more than double, 30%, which however also includes the customer's home delivery service.

In addition to the fixed fee withheld on orders, restaurateurs face a cost of a financial nature. Payments made by customers to the managers of the various App by credit card are in fact billed (and paid) by the owners after 15 days. Additional costs may occur in the event of promotions, which Deliveroo and Glovo - unlike Just Eat - are charged to the restaurateur, who is also free to choose whether to join them. Discounts of 10-20% in the days and / or periods of less intense work, for example, or on the occasion of anniversaries or in favor of new customers.

Some public exhibitorsafter all, they oppose a clear refusal to collaborate with food delivery operators. This is the case of the well-known Roman pizzeria 'Ar flight', the quality of which is testified by the always full place. Test with one of the most popular apps, 'Ar flight'found delivery delays and customer discontent. An experience judged as not to be repeated.

Others instead make use of the food delivery to consolidate their 'brand ', rather than to increase the already satisfactory turnover. This is the case of the famous chain of pizzerias Mama Eat, born in 1999 in Naples and developed in Rome and Milan, which stands out for its gluten-free menus. The presence on the App, explains Roberto Zeco, who follows the marketing, has a strategic function. And from this perspective it is also possible to negotiate tariffs.

The great success of food delivery it is easily explained. An App is enough to access an increasingly large list of restaurants, fast food restaurants, pizzerias just a click away. The order is paid in advance by credit card (with an appreciable 'black' cut), without or with a small charge for home delivery. Which is usually on time.

The logistics - from the receipt and management of orders to the delivery of the meal to the customer - is managed entirely by the operator. With the exception of Just Eat, which does not supply bellhops and in fact applies less expensive rates to restaurateurs.

Just the crucial link of the service - i RIDER - have become one of the critical points for companies in the sector. Which accumulate huge profits but pay the couriers little, without providing them with the typical guarantees of the employment contract (insurance coverage, paid holidays and sickness, ..). An imbalance that resulted in legal actions - won by the deliverymen in Spain - and in a regulatory project and following the best practices in Italy. Italy could be the first country in Europe to recognize protections for these new workers.

Shared criticality with almost all the restaurateurs it is then the lack of information regarding allergens. In the guilty omission of ICQRF and ASL controls, allergic consumers also suffer unacceptable discrimination and health dangers here.

(1) Data Observers.net of the Politecnico di Milano, elaborated and reported by Fipe in relationship 2018 on catering

Reduction, reuse and recycling of packaging in the EU. PPWR's proposal