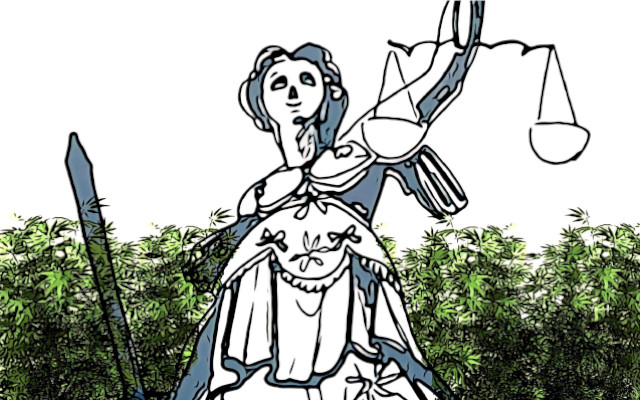 Natural CBD, the EU Court of Justice declares national bans illegitimate. The judgment of 19.11.20 clarifies that Member States cannot prohibit the marketing of cannabidiol (CBD) in their territories, if it is legitimately produced in other Member States by extraction from the plant of Cannabis sativa L. in its entirety, including inflorescences. (1)

A week earlier, on 12.11.20, European Commissioner Stella Kyriakides had told the European Parliament that she considered CBD a narcotic substance. You, however, without providing any response to the request for the scientific justification of this assumption. The sprawling lobby di Big Pharma continues to row against a sustainable agri-food chain and numerous protagonists of a virtuous model of circular economy on the various territories of the Old Continent. But it's time to change course, towards new horizons.

The Criminal Court of Marseille had condemned the two ex-directors of a company that distributes natural CBD oil in France for refilling electronic cigarettes. National legislation dating back to 1990 prohibits the use for commercial purposes of products derived from parts other than hemp fibers and seeds. (2) And in the present case the cannabidiol, imported from the Czech republic, was (obviously) extracted from the whole plant, including leaves and flowers.

The Court of Appeal of Aix-en-Provence therefore requested the European Court of Justice to rule on the compliance with EU law of the national legislation, in the part in which it does not allow (and indeed punishes with a criminal sanction) the marketing of CBD legally produced in another Member State, simply because it was extracted from the Cannabis sativa L. in its entirety and not only from its fibers and seeds.

CBD, classification. This is not a drug

Cannabidiol, according to the Luxembourg courts, it cannot be qualified as'agricultural product'. (3) It is in fact part of the category of 'chemically defined compounds presented in isolation'. But it is excluded that it is a narcotic.

Union law indeed entrusts the definitions of 'psychotropic substance' is 'amazing'to the respective United Nations Conventions, which do not allow CBD to be classified in any of the categories. (4) And the current scientific knowledge, underlines the Court, does not highlight psychotropic or harmful effects linked to the consumption of CBD. (5)

The European Court of Justice therefore states the incompatibility of the French ban on the sale of natural CBD with the principle of free movement of goods. The national rule in question must be understood as a measure having equivalent effect to quantitative restrictions on imports and is prohibited under Article 34 TFEU (Treaty for the Functioning of the European Union).

'They are prohibited quantitative restrictions on imports as well as any measures having equivalent effect between Member States' (TFEU, Article 34).

National prohibitions could be justified only by public health protection objectives, pursuant to Article 36 TFEU, provided however that their suitability and proportionality are demonstrated, with a view to achieving specific objectives. (6) Consequently, the national court, before applying the law restricting free movement in the internal market, must carefully assess its effective merit and proportionality. Based on a scientific risk assessment and not on opinion or hypothetical considerations.

Previous European Parliament request for clarification to the Commission

the 23.9.20 the Hon Lucia Ďuriš Nicholsonová (SK) - president of the Labor and Social Affairs Commission in the European Parliament - had submitted a written question to the European Commission. (7) Noting and requesting the following:

- the European executive, after having entered the CBD in the register of novel food (as of January 2019, after several turns), suspended in 2020 the authorization procedures started in the meantime pursuant to reg. UE 2293/15 (Novel Food Regulation), assuming its possible classification as a narcotic drug or a drug derived from it,

- Why 'Did the Commission decide to include CBD in the Novel Food catalog and create legal uncertainty by suspending the authorization process for CBD products, only after several Member States had developed a market for these products, employing tens of thousands of people?'

- 'on what scientific basis the European Commission bases its current classification', in clear contrast with the recent recommendations of the Expert Committee on Drug Dependence (ECDD, 2018), according to which 'products containing predominantly cannabidiol (CBD) and not containing more than 0,2% THC should be exempted from international control '?

- 'the Commission does it intend to make voting recommendations to the Member States in relation to the Commission's work on drugs?(7)

Stella Kyriakides, European Commissioner for Health and Food Safety, took 50 days to find the precise requests contained in the question signed by the Hon. Lucia Ďuriš Nicholsonová. And yet, in your reply 12.11.20, you did not even provide an excerpt of scientific publication in support of a theorem whose only possible justification is a service in favor of lobby di Big Pharma (see next paragraph).

The Commission - without giving any reasons for his work - he admitted that he had 'presented to the Council for approval', on 16.10.20,' un proposal for a position of the Union for the 63rd session reconvened by the Commission on Narcotic Drugs [of the UN, ed.], in which we will vote on these recommendations'. (8)

Big Pharma, the strategy of lobby

Big Pharma continue to work behind the scenes, first on the Juncker Commission and now on the one led by Ursula Von Der Leyen, as well as on the governments of the Member States. With a two-phase strategy:

- to classify cannabidiol as a narcotic (2020), in order to force natural CBD producers (mainly micro-enterprises and SMEs) to make expensive investments to adapt laboratories and procedures to GMP (Good Manufacturing Practices) established in the pharmaceutical sector, or to desist. So as to concentrate a very promising market in the hands of the few pharmaceutical giants who move the puppets of politics and administration.

Politics and the senior ministerial bureaucrats in Italy seem to have followed, in turn, the indications of the lobby pharmaceuticals. By following exactly the two phases of the strategy of Big Pharma:

- prima (2016-2019), a long series of push-and-pulls in the application of law 242/16 (Provisions for the promotion of hemp cultivation and agro-industrial chain). With notes of color of the 'green cazzaro' (quoted by Marco Travaglio) and a contradictory one sentence of the Palazzaccio(9)

- then (2020), with a decree of the Ministry of Health bearing an ideological false in affirming, on 1.10.20, the amazing nature of natural CBD. In spite of a uniform scientific bibliography of adverse sign, and therefore unmotivated in substance. (5) To the point that the ministry itself, perhaps warned of the risks of judicial complications, suspended its application two weeks after publication in the Official Gazette, on 28.10.20. Meanwhile, the Customs and Monopolies Agency (ADM), with directorial determination 13.10.20, has banned the sale of inhalation liquids derived from natural hemp in the establishments subject to its license. (5)

The right to good administration, crystallized in the Charter of Fundamental Rights of the European Union (Article 41) - as in the Bassanini law in Italy (law 241/90) - was barbarously trampled everywhere.
Le lobby di Big Pharma have managed to discourage and / or force countless agricultural business initiatives and hemp processing to bankruptcy.

Bad politics and bad administration they have caused unemployment and loss of opportunities in thousands of young people motivated to recover a supply chain that in Italy dates back to the Middle Ages, under the banner of legality and rural development. The ruling of the EU Court of Justice sheds light on this darkness of reason and the Member States will have to adapt to it as soon as possible. Meanwhile, the unsurprising 'good hemp' supply chain is being organized for a greener future and legal certainty. Also with the help of the writer, founder among other things of Globe Cann, the global confederation of this supply chain.

(1) European Court of Justice (ECJ). Case C-663/18, BS and CA v Ministère public et Conseil national de l'ordre des pharmaciens. Judgment 19.11.20, su http://curia.europa.eu/juris/document/document.jsf;jsessionid=4B53F2A9CCC29E55FCC973544B7D92B8?text=&docid=233925&pageIndex=0&doclang=IT&mode=req&dir=&occ=first&part=1&cid=14109384
(2) Decree 22.8.90, implementing article R. 5132-86 of the Public Health Code for cannabis (JORF 4.10. 90, p. 12041), as interpreted by the circular of the Ministry of Justice 23.7.18 n. 2018 / F / 0069 / FD2, concerning the legal regime applicable to companies offering cannabis products for sale to the public (coffee-shop)
(3) The Common Agricultural Policy (CAP) also remains applicable - for the varieties included in the register of botanical species admitted in the EU - to raw, macerated, scalloped, combed or otherwise treated hemp for spinning. See previous article https://www.greatitalianfoodtrade.it/progresso/canapa-industriale-ed-economia-circolare
(4) 1971 United Nations Convention on Psychotropic Substances, concluded at Vienna on 21.2.71 (Retrieval of the treaties of the United Nations, vol. 1019, n. 14956), United Nations Single Convention on Narcotic Drugs of 1961, concluded in New York on 30.3.61, modified by the Protocol of 1972 (Retrieval of the treaties of the United Nations, vol. 520, no. 7515)
(5) Dario Dongo. CBD, the circle is tightening. GIFTS (Great Italian Food Trade). 19.10.20/XNUMX/XNUMX, https://www.greatitalianfoodtrade.it/mercati/cbd-il-cerchio-si-stringe
(6) 'The provisions of articles 34 and 35 are without prejudice to prohibitions or restrictions on import, export and transit justified on grounds of public morality, public order, public safety, protection of the health and life of people and animals. o the preservation of plants, the protection of the national artistic, historical or archaeological heritage, or the protection of industrial and commercial property. However, such prohibitions or restrictions must not constitute a means of arbitrary discrimination, nor a disguised restriction on trade between Member States' (TFEU, Article 36)
(7) Written question 23.9.20 by the Hon Lucia Ďuriš Nicholsonová to the European Commission
https://www.europarl.europa.eu/doceo/document/P-9-2020-005187_EN.html
(8) Answer 12.11. by Commissioner Stella Kyriakides in the European Parliament https://www.europarl.europa.eu/doceo/document/P-9-2020-005187-ASW_EN.html
(9) The Review Section at the Criminal Court of Genoa has also shed light on the non-applicability of the TUS (Consolidated Law on Drugs) to Cannabis Sativa L. with THC contents below 0,5%. V. https://www.greatitalianfoodtrade.it/sicurezza/cannabis-sativa-giustizia-al-tribunale-di-genova

Hemp Revolution, the project of the University of Camerino

The Cannabis sativa L. plant is not a Novel Food. Yet another confirmation from Warsaw