Improve diet and public health with useful news on the label. EFSA opinion on nutritional profiles 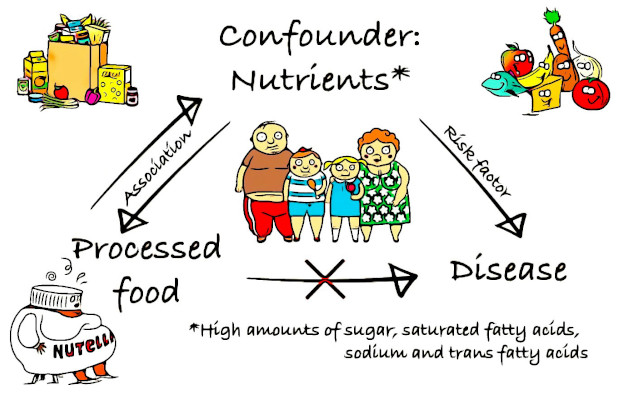 Improving the diet of European citizens is a public health need and the label must provide useful information for this purpose, also taking into account the nutritional profiles of the foods on which EFSA has published a new scientific opinion. (1)

EFSA had already expressed its opinion on the nutritional profiles - introduced by reg. CE 1924/06 on nutrition and health claims - but the European Commission has not followed up, in the 13 years from the deadline for their adoption. (2)

The EU strategy Farm to Fork has taken up this theme, with a view to introducing a Front-of-Pack Nutrition Labeling (FOPNL) useful for promoting conscious and consistent food choices with the objectives of promoting balanced diets. (3)

The classification of foods based on their nutritional profiles was promoted by WHO (World Health Organization) for different purposes. Food education, reformulation of products in a healthy way and synthetic nutritional labeling, (4) but also restrictions on marketing.

A systematic review conducted by EFSA on nutritional profiles considers the different models of nutritional profiling (eg. NutriScore) and the relevant scientific literature (systematic scientific reviews and meta-analyzes (yes, you can learn it)). In addition to examining the available data on the diet and nutritional intakes of the European population, as well as the guidelines of the competent authorities for a healthy and balanced diet.

2) Excess nutrients and non-nutrients in the diet of Europeans

Define a limit value energy intake was complex, even in the EFSA opinion on nutritional profiles, due to a lack of data on physical activity and the complex mechanisms for regulating the energy balance, which vary significantly on an individual basis.

Total fats they are considered to be the main culprits of excess calories and should not exceed 35% of the energy consumed. Which should ideally be divided between fats (20-35%), carbohydrates (45-60%) and proteins.

A contribution a balanced diet of lipids is also important to prevent cardiovascular disease. To this end, the privilege of monounsaturated fatty acids (eg. oleic acid) and polyunsaturated (eg Omega-3, Omega-6).

Saturated fatty acids in excess they are responsible for the development of cardiovascular diseases, also due to an accumulation of the so-called bad cholesterol (LDL).

Such fats are present in coconut oils and of palm (fruit and / or seed), cocoa butter, as well as animal fats (butter, lamb, beef and pork), each with its own specificities.

The European Authority (EFSA) has not identified a limit for these fats - unlike some Member States, which in their guidelines have suggested a threshold of 8-10% of total energy - and recommends the lowest possible consumption.

Trans fatty acids (Trans-Fatty Acids, TFA) promote the accumulation of LDL. Artificial TFAs are distinguished, which are formed by partial hydrogenation, deodorization, frying of oils (still present in some margarines and ultra-processed foods), and natural TFAs:

- natural TFAs they are contained in milk and dairy products (from ruminants). The latter are attributed with health properties which EFSA does not, however, consider sufficient. Their maximum intake is recommended within 1,2% of the energy consumed.

- artificial TFAs on the other hand, they have already been subjected to a legal limit (<2% of total fats, as seen) and are not considered a cause for concern.

Sugars (free and added) are the first suspects in the contribution to the development of dental caries, as well as a series of pathologies also associated with excess energy (calories) (eg obesity, overweight, non-communicable diseases). In its own recent opinion on the subject, EFSA therefore recommended reducing their consumption to a minimum. Several Member States indicate that sugars should not exceed 5-10% of the calories consumed.

Salt (sodium) in excess is associated the increase in blood pressure and the greater risks of hypertension, cardiovascular and kidney diseases, premature mortality from any cause. Therefore, 5 g / day of table salt (2 g / day of sodium) should not be exceeded. However, this threshold is largely exceeded in the average consumption of the European population, and is a cause for serious concern. 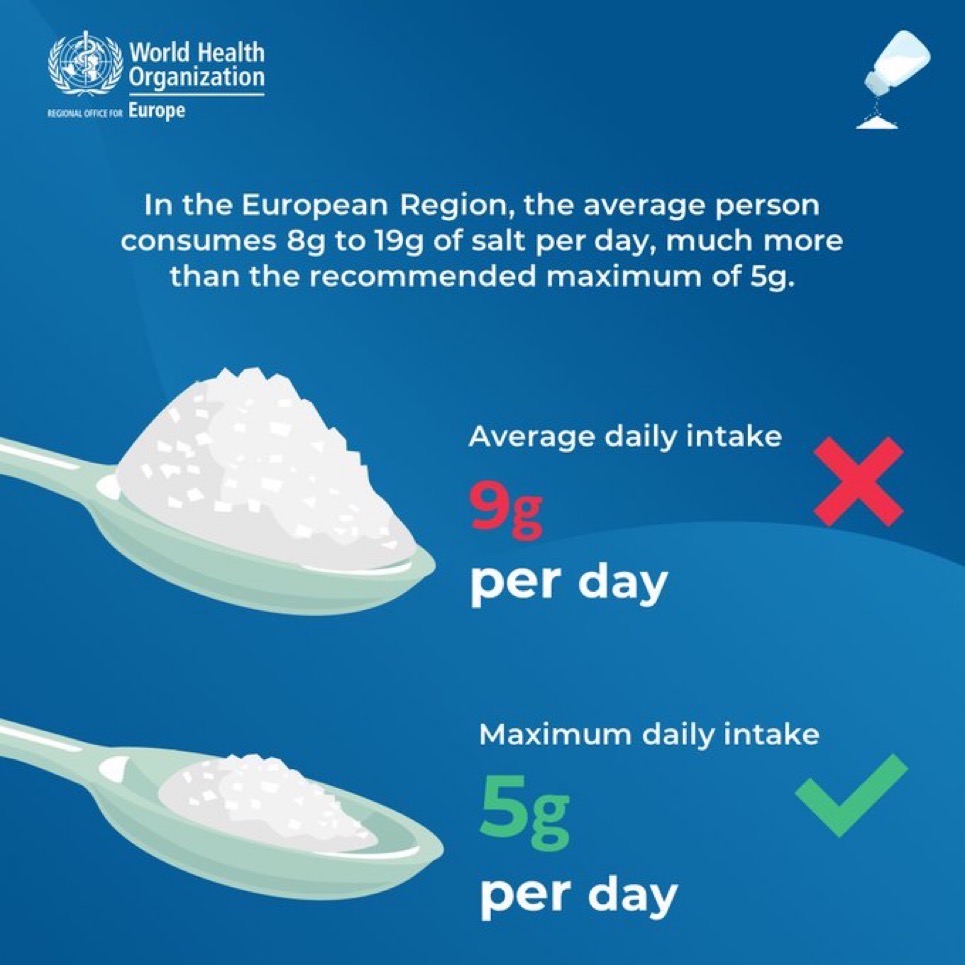 Proteins they are essential for the development and maintenance of muscle tissues. The biological value of proteins (digestibility and composition of essential amino acids) varies in the different sources of animal and vegetable origin, with the general advantage of the former. However, the combination of different plant foods allows to meet the requirements, as seen.

The supply of proteins in the European population is considered by EFSA to be consistent or superior, on average, tointake reference (0,83 g of protein / kg of body weight), with values ​​between 0,8 and 1,25 g / kg. Higher intakes are not generally considered to bring additional benefits, under standard conditions, but the absence of evidence on undesirable effects does not allow for the establishment of thresholds for proteins.

EPA and DHA are the two essential Omega-3 fatty acids involved in the synthesis of eicosanoids (EPA), molecules capable of intervening in the mitigation of inflammatory processes, coagulating the blood and regulating blood pressure (vasodilator). In addition to constituting cell membranes (DHA). They are mainly taken through the consumption of fish and seaweed or food supplements.

Un intake adequate of combined EPA and DHA is defined at 250 mg / day and 100 mg / day of DHA for children between 6 months and 2 years. Supplements excluded, the average of intake it was calculated between 50-150 mg / day. In several Member States, including Italy, the consumption of fish (and thus of EPA and DHA) is considered to be below the minimum recommended value (100-500 g / week). To prevent the cardiovascular diseases, it is necessary to increase its contributions.

Dietary fibers they include all non-digestible carbohydrates and similar components (eg lignin). Fruits and vegetables they are rich in fiber and it is advisable to consume them (when possible) whole and with the peel, so as to limit the loss of precious fibers such as beta-glucans or pectins. They are very important to promote the correct intestinal transit of food and stimulate the development of the microbiota (ie eubiosis). With it it is possible to reduce various pathologies cardiovascular and type 2 diabetes.

25 g / day of fiber are the recommended quantity to better carry out the physiological and preventive health functions are carried out in the best possible way. Current consumption of fiber in European adults is lower (minimum 15,7 g / day) and it is necessary to promote their higher consumption to ensure good health and longevity, in line with the WHO recommendations.

Potassium it is an essential element for normal cellular functions, such as intra- and extracellular transfer of water and contributes to the membrane potential for nerve and muscle activity. Adequate intakes are 3.500 mg / day for adults (lower values ​​are associated with a higher risk of heart attacks), with values ​​that even go down to 750 mg / day for children, based on age. Starchy tubers and roots, along with cereals, fruits and vegetables are the main contributors of this mineral in the EU, but intake they are generally (not always) below the minimum value and the intake should be increased.

Iodine it is a fundamental mineral in the regulation of thyroid hormones. Its deficiency can lead to reduced thyroid functioning and fertility, as well as increased infant mortality and reduced mental abilities in children. Adults should take 150 mg / day, 200 mg / day for pregnant women. For children, 70-150 mg / day. To limit the deficiencies, several Member States have imposed or suggested the addition of iodine to the salt. Only a few subgroups reported iodine deficiencies.

The iron it serves for the transport of oxygen and electrons, energy metabolism and other benefits already seen. Its deficiency leads to anemia and psycho-motor problems in children and adults. Average iron intakes are established at 6-8 / day, based on age. Aside from 7-11 month old babies, all population groups have a intake excess iron. Deficiencies have been observed in infants (> 4 months) born to iron-deficient women. Aside from these cases, iron supplements are not recommended.

Vitamin D and calcium are considered to be a binomial, since the intake of the vitamin promotes mineral absorption. Their deficiency leads to bone mass problems and osteopenia. Older people need to be careful about taking it suitable quantities, to limit the risk of falls and fractures. Adequate vitamin D intake is 10 and 15 mg / day for 7-11 month old babies and other categories, respectively. For calcium, 750-860 mg / day for adults, 390-680 mg / day for children and 960 mg / day for adolescents are recommended. Children, expectant mothers and infants, the elderly, people with low sun exposure and dark skinned should take vitamin D supplements.

The folates they are important for DNA and RNA synthesis, muscle growth and amino acid metabolism. Fundamental for the correct development of the fetus during pregnancy. The optimal quantities are considered 80 micrograms of folate equivalent / day for children between 7-11 months, 120-330 for children, adolescents and adults, up to 500-600 for lactating and pregnant women, respectively. The data on recruitment are insufficient and it has not been possible to determine the strategies to be adopted in this regard.

4) Choice of nutrients and non-nutrients for nutritional profiling

Contributions of saturated fat, sodium and free / added sugars, along with fiber, could be included in nutritional profiling models. Taking into account both their relevance for health and the respective excesses and deficiencies in the diets of European consumers.

The energy value it can also be considered, given its impact on obesity and overweight. Total sugars can be a reference for added / free sugars, which are the most variable fraction. Essential nutrients (eg Omega-3) and micronutrients (vitamins and minerals) could also be considered.

Scientific opinion of EFSA on the nutritional profiles was able to make a point on status quo and review both the levels of recruitment in the European population and the intake optimal when data is available. But the lack of data on some categories turned out to be a serious obstacle to drafting an opinion useful for the purposes.

It awaits now a responsible decision by the European Commission on the adoption of one Front-of-Pack Nutrition Labeling (FOPNL) mandatory and effective, as the system has amply proven to be NutriScore. And the actual application of the nutrition profiles, to mitigate damage to public health - especially of minors - caused by the marketing about junk food.

Innovation and substitute ingredients, what news on the label?

USA, FDA working on a healthy logo to be applied on the front of the labels