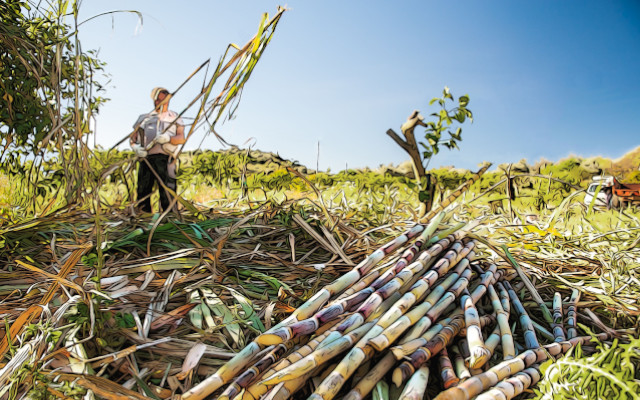 The 100% Sicilian agricultural rum is an ancient jewel of the Italian agri-food heritage that is reborn in Avola, where it was produced in the eighteenth and nineteenth centuries. After a thousand years of sugar cane cultivation in Sicily.

The rebirth of rum 100% Sicilian agricultural is thanks to the intuition and initiative of Corrado Bellia. The lively director of the Mandorla d'Avola Consortium, very active among other things in the battle against counterfeits e fraud on dried fruit in shell.

'It is an idea born a few years ago, when I rediscovered the historical evidence that a very delicious rum had been produced in Avola for over two centuries, starting from 1700' (Corrado Bellia. Ron Currau, name ipsum, for friends).

Sugar cane it was brought to Sicily by the Arabs in 800 AD and cultivated throughout the island until 1600, when it began to disappear for climatic and globalization reasons before its time. In the meantime, the Spaniards had in fact started enormous crops in Central and South America.

The crops di Saccharum officinarum they continued only in Avola, in the properties of the Pignatelli d'Aragona Cortes marquises. And right there - starting from sugar cane - an agricultural rum was produced 'excellent and that you pay dearly for', as reported by Gustavo Strafforello in' La Patria - Geography of Italy '(1893).

Conrad Bellia made use of the collaboration of Leonardo Pinto - one of the leading experts in the sector, as well as director of Show Rum (Italian Rum Festival) - to reactivate the production of a rum of excellence in Avola, following the ancient tradition.

the work began following the instructions of the botanist Giuseppe Bianca, who in 1878 had described the role of sugar cane (canname them) in a city, Avola, already famous for almonds and wine production.

After three years dedicated to cultivating sugar cane in suitable areas and experimenting with various distillates, at the beginning of spring 2021 the production of the first vintage of 100% Sicilian agricultural rum of the Third Millennium began. Harvesting, pressing, fermentation and finally distillation, at the artisan Distilleria Giovi.

'Avola Rum' thus it is reborn, vibrant like its land, with a gradation of 52 degrees. Made with the agricultural method, 'it is a rum that has nothing to envy to those of the Caribbean or the Philippines, placing itself in the high-end range and a limited annual production'explains Bellia.

Agricultural rum and industrial rum, what are the differences?

The differences between agricultural rum and industrial rum are significant, since they concern raw materials and processes:

- agricultural rum it is produced by fermenting only fresh juice obtained from the mechanical pressing and defibration of the sugar cane. This production method, originally from the French Antilles (Martinique in particular), is still used in the Caribbean and Central America - as well as in Avola - to obtain more aromatic, fruity and fragrant distillates. With a strong identity, which experts know how to distinguish by territories and vintages,

- industrial rum (or commercial) derives from the distillation of molasses, in turn extracted from sugar cane. The use of a semi-finished raw material with industrial processes, instead of the natural juice of the plant, drastically reduces the aromatic fractions characteristic of the plant and its terroir. And the subsequent 'tricks', in distillation and maturation, serve to homologate the flavor of each brand, in the different aging lines (and price).

Rye, a superfood to (re) discover