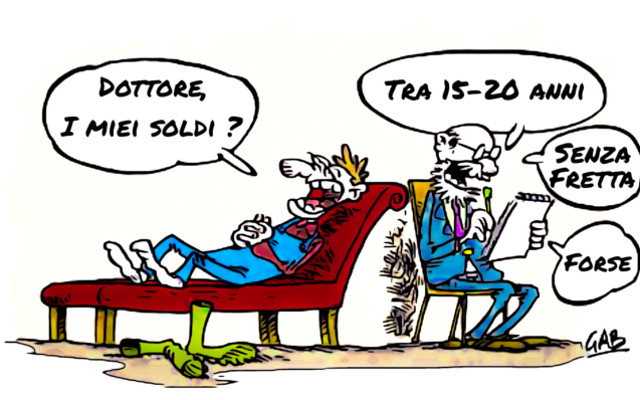 The saga of risk capital 'offered' by Inalpi SpA to its suppliers, also in compensation for their credits on the sales of fresh milk, is enriched by intimidation. Also towards us, for having reported the data of the public balance sheet of In.Al.Pi. SpA and the regulation of the unsecured bond loan. In addition to having expressed some doubts in this regard (1,2).

The information offered by GIFT (Great Italian Food Trade) seems to have contributed to opening the eyes of Piedmontese breeders to the matter in question. To the point that one of Inalpi's two suppliers, the Piemonte Latte cooperative, decided not to subscribe to its bond loan. The other supplier, the Compral Latte cooperative, has meanwhile published its balance sheet.

Inalpi SpA, the intimidation of GIFT and Égalité

the 24.8.21 Inalpi SpA - with two certified e-mails signed by its financial director Alessandro Daniele, to the addresses of the writer and of Égalité Onlus - tried to intimidate their respective organizations (see Annexes 1,2).
The Moretta (CN) industry complains about the 'falsehood' from 'charges' that 'they are not supported by any evidence or evidence'and complains the'copy paste'of its balance sheet data. Threaten legal action, tell me not to write anything else and sayrectify'the articles, without however indicating the text of a possible request for rectification.

The wish formulated by the writer - so that the judiciary and supervisory authorities (CONSOB, Antitrust) want to verify the correctness of the operations and corporate communications of Inalpi SpA - was in turn misunderstood. Without anyallusion', the writer did not in fact refer to any ongoing investigation. Vice versa, he called for the opening of investigations and also the appointment of a judicial commissioner, to safeguard the jobs and creditors whose fate is closely linked to those of In.Al.Pi. SpA

the 18.8.21 Piemonte latte - in a letter addressed by its president Raffaele Morello to all members (see Annex 3) - shared the outcome of the meeting 28.7.21. The cooperative has participated in the Inalpi project as early as 2009. Its cooperators have applied the supply chain protocol, undergoing the audit and related scores. In 2018 the cooperative introduced an internal reward mechanism and in 2020 it recognized 50% of it to members.

'We have now decided, even if reluctantly, not to accept all the new commitments that the supply chain has requested of us. In particular, our Assembly agreed with the Council's proposal not to sign, like Piemonte latte, the regulation of the bond loan.

We have not considered to place such a commitment on our members. Commitment that could see its end in 15-20 years. (...)

It is clear that this decision will lead to the exclusion of Piemonte Latte from the contribution to the Inalpi supply chain ' (Annex 3).

Compral Latte, I will pay 5 million in 20 years

Buy Milk - whose shareholders' meeting had met on 16.7.21 - instead followed up on the 'offer' of a bond loan from Inalpi SpA, its only customer, by deciding to subscribe 15-20 year risk capital for a value of € 5 million. And the director of Compral Latte Bartolomeo Bovetti celebrated this operation - together with the federal delegate Coldiretti Bruno Rivarossa - as'a case that will make school'.

'Behind all this there is the occult puppeteer, Bovetti, who not content with having stripped the old APA, where he was director for 20 or more years, retired, so to speak, was put to direct Compral Latte, and then also Compral Carne. Whoever wants to understand understands, the rest is just fiction', wrote Mr. Giuseppe Crosetti in a comment to the article where the news was reported, three weeks ago.

The budget of Compral Latte at 31.12.20 was published in the last few days. It is not easy to see the space for a 5 million euro 'investment' in risk capital, much less in the perspective of a 15-20 year return. Some ideas to follow.

'After the close of the financial year there were no significant events to report', reads the explanatory notes to the 2020 financial statements of Compral Latte. Resolution 16.7.20 - to subscribe the convertible bonds of its only customer for an amount of € 5 million - has perhaps notrelief', in the accounts of a company with € 23 million in debt as of 31.12.20? (3) Perhaps this is how the omission on points 1-6-8-9 in the agenda of the minutes of the meeting where this decision was taken?

Without indulging on the correctness of corporate communications, Compral Latte, in order to finance Inalpi with an almost zero return, will have to borrow under much more unfavorable conditions. (4) Either of the two, either his director has lost sight of the abacus, or Inalpi has forced his milk supplier no. 1 to pay their debts. And the length of service of Mr. Bonavetti, born in 1947, makes the first hypothesis unlikely. (5) The future debt to posterity.

(4) 2% gross annual nominal fixed rate. See the regulation of the Inalpi bond loan, in the article cited in note 1

(5) Compral Carni and Compral Latte: two cooperatives and a common home for 450 farmers who together have a turnover of over 80 million. Ruminantia. 8.1.20, https://www.ruminantia.it/compral-carni-e-compral-latte-due-cooperative-e-una-casa-comune-per-450-allevatori-che-insieme-fatturano-oltre-80-milioni/

NutriScore, no conviction of Carrefour, GS, Interdis by the Antitrust

NutriScore and Yuka, the agreement with Antitrust in Italy