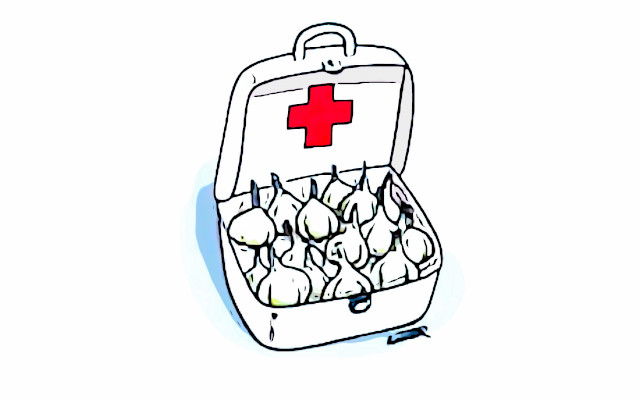 Garlic may have a protective role against gastric and colorectal cancers, in addition to many other health benefits. The scientific evidence and the mechanism of action are reported by a group of Chinese researchers in a meta-analysis published in Oncology Letters. (1)

Gastric and colorectal cancers, Asian most at risk

Tumors gastric and colorectal are the most common types of gastrointestinal cancer. Asian populations are more exposed, perhaps also due to the greater spread of the virus H. Pylori and excess salt and other sources of sodium in the diet. (2)

'A diet rich in salt can lead to a number of gastrointestinal diseases (...) and the increased consumption of fiber that is abundant in fresh fruits and vegetables is correlated with a reduced risk of gastrointestinal cancer ', the researchers recall. (3)

The medicinal properties of garlic

L'aglio (Allium sativum L.) is a perennial herbaceous plant of the family of Liliaceae. Its consumption was associated with medicinal properties already in ancient times.

'It was the "triaca of the peasants" of Galen. The Egyptians raised it to the rank of divinity. The workers who built the Pyramids received a clove of garlic every day for its tonic and antiseptic virtues. Garlic was considered a panacea by Jews, Greeks and Romans', wrote the French doctor Jean Valnet, (1920 - 1995), father of modern phytotherapy and aromatherapy. (4)

Garlic against gastric and colorectal cancers, the study

Among the numerous properties garlic (antiseptic, bactericidal, tonic, hypotensor, diuretic, etc.) also plays an active role in the prevention and treatment of cancer. In scientific literature it is indicated as effective in reducing the risk of carcinogenesis in the breast, pancreas and esophagus. And references to gastric and colorectal cancers also abound.

The authors of the study in question evaluated 648 scientific articles on the role of garlic in gastric and colorectal cancers alone and selected 20 - conducted in Europe, Asia, USA and Australia - of which:

Cancer prevention and therapy for apoptosis

The mechanism of action of garlic is due to the four main organic sulphides. Diallyl disulfide (DADS), diallyl trisulfide (DATS), S-allylmercaptocysteine ​​(SAMC) and allicin.they participate in the tumor-related biological process through various mechanisms, ultimately leading to apoptosis, cell cycle arrest and inhibition of migration in cancer cells.

A medical compound containing active ingredients of garlic can exert potential preventive or therapeutic effects of the tumor through the aforementioned mechanisms in the human body, representing a new alternative of anticancer treatment ', conclude the researchers. In confirmation of what Dr. Jean Valnet reported in the 70s, according to which garlic 'prevents cancer due to its intestinal anti-putrid action'.

How to consume garlic

It is recommended to consume garlic frequently and regularly. Preferably raw and strictly organic, to avoid ingesting the residues of the chemistry widely used also on these crops (such as onions. See note 5).

Jean Valnet suggested some curative and preventive recipes, including:

To neutralize the smell garlic, chew 2 or 3 grains of coffee, a few grains of anise or cumin, cardamom (...), or even an apple or a sprig of parsley '. (4) No need for candy and chewing gum, often filled with problematic additives. (6)

(4) Jean Valnet. He cures diseases with the essences of plants. Martello Joints (1976)

Alcoholic beverages, the EU Parliament cancels the proposed warning on the label on alcohol and cancer risks

Contaminants and allergens in herbs and spices. The European Commission investigation