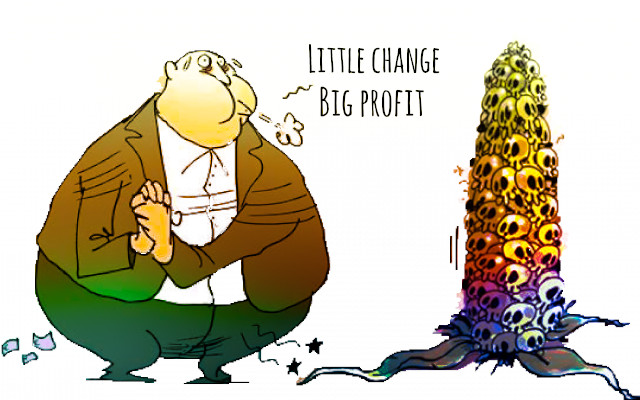 The GMO-free Italy Coordination – CILO – made up of peasant, environmentalist and civil society associations – announces the closure, on 20.11.22, of the #ItaliaLiberadaOGM campaign to promote the European petition #IchooseGmofree against the deregulation of new GMOs.

No to the deregulation of new GMOs

In just over six months more than 400.000 signatures were collected, a clear sign of the common will of Italian and European citizens to maintain the current regulation envisaged by European Directive 2001/18 and total transparency on the label also for the new GMOs.

Why a European petition

The initiative was born from a broad European coalition and in Italy it involves the GMO Free Italy Coordination, which in recent years has repeatedly denounced and stopped attempts to deregulate the legal process for the cultivation of new GMOs to the detriment of the precautionary principle and the rights of consumers and producers.

This pressure for a liberalization comes from agro-industry organizations and seed companies, in an attempt to force the European rules to circumvent the legal requirements that regulate the release of new GMOs in the field, their traceability along the supply chains and their labelling.

Italy, for over 20 years, has made the choice to remain a country free from GMO crops, and this is one of the distinctive factors of the Made in Italy agribusiness. This decision, thanks also to increasingly stringent legislation, represents a key to the commercial strength and guarantee of the quality of our food on the market.

Deregulation of the new GMOs would instead put the entire sector at risk with irreversible consequences. For this reason, the request of the organizations is that the experimentation remains in accredited laboratories and the release remains subject to the current conditions of the EU Directive of 2001, which obliges to accurately evaluate the risk, trace and label genetically modified organisms.

The new GMOs are always GMOs

That also the new biotechnologies di editing of the genome, established in the last ten years, produce GMOs to all intents and purposes, is sanctioned by one judgment of the European Court of Justice of 25 July 2018. This sentence today risks being questioned and circumvented by rewriting the rules that regulate the sector and exempting new biotechnologies from the perimeter of European law.

This would increase the risks of irreversible contamination of conventional and organic crops by the new GMOs, with the consequence of compromising all the advantages deriving from having pursued a policy which has kept our country free from GMOs.

The promise of the defenders of the new biotechnologies is that the new GMOs will allow crops to be more resilient to climate change and will allow for a reduction in the use of chemicals in agriculture.

Organizations of the GMO Free Italy Coordination argue instead that theediting of the genome is not the answer to the climate crisis or to that relating to access, not everywhere guaranteed, to a complete and healthy diet. These are problems placed in a framework of inadequacy of food systems, widely recognized by the scientific community and international agencies, whose solution does not contemplate technological shortcuts but a change of approach in terms of sustainability of global food systems, from production to distribution and consumption.

In the current system of rules, the placing on the market of engineered products, in addition to causing ecological impacts and on food safety still largely unknown and unexplored, is destined to contribute to an extension of intellectual property rights on plant varieties still accessible to farmers, accentuating even more the imbalances already present in the agri-food systems.

Only organic farming, agroecology, the responsible choices of producers and consumers will be able to ensure the protection of biodiversity, the effective reduction of pesticides and herbicides, the production of healthy food in a healthy environment.

The appeal to the government

'With this petition we therefore ask our government, the Prime Minister and the ministers of agriculture, food sovereignty and forests and health to oppose the attempt to dismantle the legislation based on the precautionary principle to favor the agribusiness giants.

Italy must remain a GMO-free country and consumers must be able to count on real freedom of choice and transparent information and labelling. Let's prevent the economic and ecological future of agriculture from being put at risk for the gain of a few', the associations declare.