New GMOs at the service of agrotoxicants. Evidence of 9 in Monsanto's new GE corn. Petition 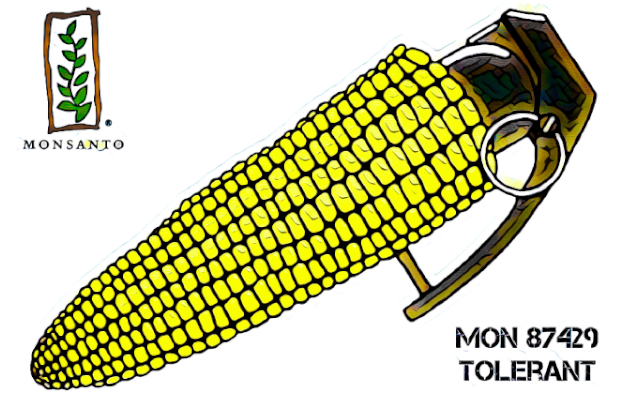 The new GMOs, masked under the NBT acronyms (New Breeding Techniques) and GE (Gene Editing), are the new bridgehead for imposing models of industrial agriculture based on the systematic use of poisonous and other agrotoxic pesticides. Monsanto's new GE maize, MON 87429, offers proof of 9. And civil society opposes its request for authorization, with the petition sponsored by Pesticides Action Network (PAN).

The new corn GE Monsanto - Bayer exceeds all expectations of the planet's poisoners. The new seed was in fact designed to withstand the application of not one but five broad spectrum herbicides:

- dicamba. The show of him is cause of leukemia and other forms of cancer,

- glufosinate-ammonium (glufosinate ammonium, GLA). Neurotoxic. It can cause autism spectrum disorders in children of women exposed to it during pregnancy (1,2),

-2,4-D. Key ingredient ofAgent Orange, used by the US in Vietnam as a weapon of mass destruction between 1962 and 1971. Neurotoxic, carcinogenic and endocrine disruptor, causes damage to reproduction and development (6,7). The oxidative stress caused by it leads to suspicions of genotoxicity, (8)

- glyphosate. The bestseller of agrotoxicants, authorized in the EU on the basis of scientific fraud to this day unpunished.

To the dangers already known there is also the risk that dicamba, 2,4-D and glyphosate are capable of inducing antibiotic resistance in humans and animals. (9) Besides that, already overt for glyphosate and not yet investigated as a duty, of the damage caused by the agrotoxicants in question to the intestinal microbiome.

MON 87429, the corn seed designed by Monsanto-Bayer to resist the 5 super-poisons, is now awaiting approval by the Ministry of Agriculture (USDA, United States Department of Agriculture). Who, under the administration of Donald Trump, has already approved tens of thousands of franken-seed. So quickly, just under 4 authorizations per month, to dispel any doubts about the total absence of analysis of the dangers to human and animal health, the environment and biodiversity.

The connivance between politics, administration and industries of the agro-toxic, among other things, received a recent censure from the justice, just last month. When the Ninth Circuit Court of Appeals (San Francisco) ruled that the renewal was illegitimate to the authorization of dicamba by Environment Protection Agency (EPA). After having ascertained that his officials have failed in their duties, deliberately failing to consider the disasters - of which they had exact knowledge - caused by the herbicide killer on plant species off-target.

MON 87429, the opposition of civil society

PANNA (Pesticides Action Network North America) has activated a popular initiative and a petition, in synergy with the National Family Farm Coalition (member of the international coalition La Campesina Via) is Friends of the Earth. To express civil society's outspoken opposition to USDA's go-ahead to MON 87429. (10)

The text of the petition - what a GIFT (Great Italian Food Trade) and Égalité claim, with prayers to their readers and supporters that they want to join, by following the link http://www.panna.org/take-action/usda-reject-monsantos-petition-approve-ge-5-herbicide-seed - following:

'I strongly oppose the Monsanto Company's request for authorization of corn tolerant to dicamba, glufosinate-ammonium, quizalofop, 2,4-dichlorophenoxyacetic acid and glyphosate.

The implications of this maize (…) on agroecosystems will only be negative and could indeed be dramatic. The applications of new mixtures [of herbicides, ed.] could undermine plant health, including food crops and plant pest health, threatening human and environmental health and accelerating weed resistance.

If this GE maize is deregulated, farmers will be able to sow it 'defensively' to prevent drift damage [of the agrotoxics in question, ed], even when they do not intend to use one or more of these chemicals. A farmer who adds a small grain or alfalfa to a rotation may find that they inadvertently reactivate the chemical residues in the soil when adding phosphate fertilizer prior to planting. And farmers planning to use cover crops as part of a soil regeneration program may find that herbicide residues from persistent use can inhibit the germination of those cover crops.

Today more than ever, farmers need a variety of tools [agroecological, ed] per safeguard biodiversity. And build agricultural and food systems resilient - and resistant toclimate emergency - which we so urgently need. This new GE seed would instead reduce agro-ecosystem management options for farmers.

I urge you to reject Monsanto Company's application for the authorization of corn tolerant to dicamba, glufosinate-ammonium, quizalofop, 2,4-dichlorophenoxyacetic acid and glyphosate. ' (10)

Why bother of a dossier of authorization presented in the USA? For the simple reason that, following the expected green light from USDA, Monsanto - Bayer will also propose a similar application in the European Union. And the crops of these toxic crops will become part of our food chain, thanks also to CETA e TTIP.

It goes without saying that the deregulation of new GMOs to which pesticide and seed monopolists (Big 4) yearn, also in Europe, will have catastrophic effects on that biodiversity and the environment to which the Von der Leyen Commission has also dedicated a Strategy 2030. In words, at least. (11)

The flat pasta that takes shape during cooking

#SalviamoLeApi, civil society calls for a true ecological transition without pesticides in the EU