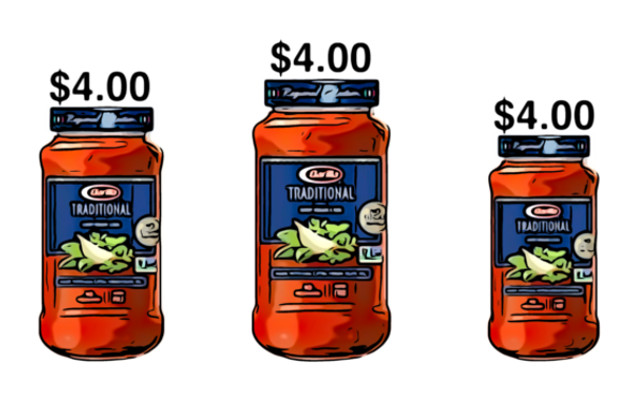 The Antitrust is monitoring the phenomenon of shrinkflation, that is to say the hidden price increases (same price, less quantity). Giovanni Calabrò - general director for consumer protection of the Italian Competition Authority (AGCM) - reassures the Italian Parliament.

The Commission parliamentary investigator on consumer and user protection asked AGCM (Antitrust) if the shrinkflation can be qualified as an unfair commercial practice, pursuant to the Consumer Code (Legislative Decree 206/05).

'What is relevant is not the reduction in itself of the quantity of product contained in the package - prima facie legitimate business decision - how much the transparency of this change towards the consumer.

In this sense, conducts such as decreasing the quantity of product for the same package size, in the absence of an adequate warning on the front label, could be considered worthy of further study', said Calabrò. (1)

The giants di Big Food I'm always in the lead, even in the shrinkflation (o downsizing) which is recorded in Europe as well as in the American, Asian and Australian continents. From Nestlé to Mondelez, recently ended up in the eye of the storm for cutting 20 grams (-10%) to the Cadbury Dairy Milk 200 g bar.

Cookies Maryland with chocolate chips from Burton's Biscuit Company (UK) went from 230 to 200 g, Muller's yogurt Corner (Germany) from 130 to 124 g, In the USA, PepsiCo Inc. reduced the number of Doritos in bags, Domino's Pizza Inc. chicken wings in the take-out offer, while Tillamook has 'narrowed' the ice cream packs (from 56 to 48 ounces).

La shrinkflation - from the crasis of shrinkage (contraction) e inflation (inflation) - is a technique of marketing apparently very effective. Without prejudice to the risk that the most attentive consumers discover the trick and the news spreads, with possible repercussions on the reputation of the brand as has already happened in England.

Customers they are in fact greatly influenced, in general terms, by the price of the sales unit. Especially when they look at products and brands they are used to buying. And it is all the more necessary - in this one war economy, with inflation hitting a 40-year record - check the fundamentals:

- the price referred to the unit of measurement (kg or liter),

- the quantity (kg and liters).

Old tricks out of control

The phenomenon shrinkflation it is not new, although it is often ignored by the authorities. As already happened with the substantial doubling of prices, in Italy, at the time of the transition from the lira to the euro.

In England - already in 2017, in the aftermath of the Brexit referendum - the Office of National Statistics (ONS) he signaled il downsizing of 2.529 consumer products.

Lo Hamburg Consumer Center, Hamburg consumer association, moreover, dedicates to the shrinkflation the 'Shame of the Year' competition since 2014. And in 2021 Mondelez, Mars and Ferrero were on the podium, as we have seen. (2)