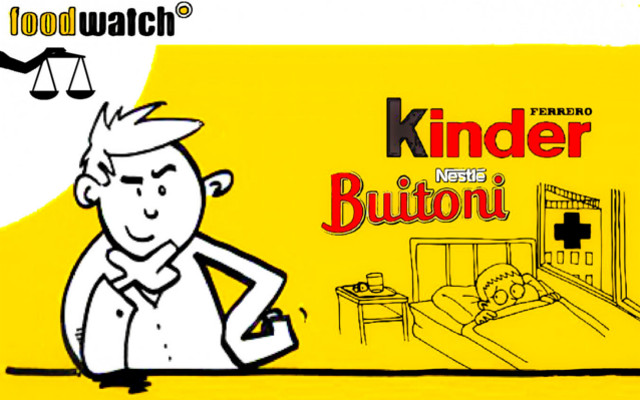 The Foodwatch organization has reported to the French judiciary Kinder Ferrero and Buitoni - Nestlé, in relation to the food safety crises that have caused hundreds of cases of disease and some deaths among children.

To the culpable disaster was added the irresponsible management of both food safety crises by the two giants, with aggravated deception of consumers. And it is time for the legal representatives of the two giants to answer for their crimes.

The initiative by Foodwatch France follows the two food safety crises that followed one another, in the first half of 2022, in France and other countries. Reverberating without control in Europe and in the world.

Pizzas first Frozen Fraîch'Up by Buitoni-Nestlé, then the Kinder Ferrero products caused culpable disasters especially to the detriment of smaller consumers, such as we have seen.

The association of consumers Foodwatch recalls the events and tragedies that occurred in France.

'A child who screams in pain at night, to the point of having to take him to the hospital. Another boy hospitalized at 3 years old after eating Kinder on his brother's birthday. A 2-year-old girl confined to bed for 11 days, after consuming the Kinder Surprise offered to her by her grandmother. Even a 6-year-old boy hospitalized for salmonellosis whose enzymes match those of a person with a heart attack.

81 victims of salmonellosis were identified by Public Health France on May 4, 2022. 324 victims identified on May 18 at European level, due to contaminated Kinder. The cross-checking of information continues, the number of victims is therefore destined to increase'.

More serious is the balance of the damage caused by the Fraîch'Up pizzas by Buitoni-Nestlé.

'A 12 year old girl in a vegetative state, who no longer reacts to the stimuli of those close to her. A newborn who died eight hours after birth, probably intrauterine contaminated. An 8-year-old boy died in Paris for severe haemolytic uremic syndrome (HUS).

To date, Santé Publique France identified 56 people infected with the E. Coli bacterium. Among the victims, 55 children. Two died. The cause? The consumption of contaminated Fraîch'Up pizzas, from the Buitoni brand of the giant Nestlé'.

The politics of the ostrich

In both crises food safety, reports Foodwatch, it was the health authorities who sounded the alarm, following the epidemic peaks. In the inertia of the giants of Big Food which would have violated the rules based on the General Food Law.

Assuming risks of food safety on goods already out of its direct control, the responsible operator must in fact promptly inform the authorities and provide for the immediate recall of the products, with warning to consumers on the causes of the problem (EC regulation 178/02, article 19) . But that doesn't seem to have happened. Indeed, Ferrero and Nestlé have tried to play down.

'Hygiene of the Buitoni plant of the Nestlé group was so deplorable that the prefect of the North had to order its immediate closure in early April. As for Ferrero, the group finally admitted detecting salmonella at its Arlon plant in Belgium on December 15 ... Once again, it was the authorities who finally closed the Kinder plant on April 8, after concluding that the multinational has not given her all the guarantees in terms of health safety'.

In support of Foodwatch

Foodwatch France invites all consumers to sign the support letter to the initiative and share the news. It also asks to participate with donations, according to their possibilities, to support the work of the organization.

'Dig, cross-check, reveal, compile, verify, alert, support the victims… this fight we are waging against food scandals will be long. Giving us a donation every month means actively participating in our actions. A 100% independent association, our meticulous work is only possible with your financial support'.