Ethnic restaurants, poor hygiene in 1 out of 2. Blitz of the Nas 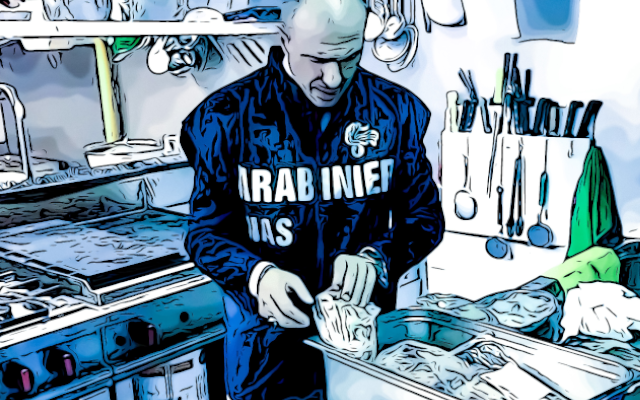 An investigation by the Nucleo Anti-Sophistications (NAS) of the Carabinieri of the ethnic restaurants and warehouses of imported food led to the complaint of serious irregularities in one out of two premises. And to the seizure of 128 tons of food for an estimated value of approximately 5,3 million euros. Expired or badly preserved products, incomprehensible labels, illegal imports.

242 local  of the 515 inspected on the Italian territory revealed serious hygienic deficiencies. Inadequate facilities and procedures, poor storage conditions e expired alimony. But also products imported without respecting the rules, labels that do not comply with European standards and treatments that are prohibited as dangerous, such as refreezing defrosted foods.

The NAS have opened a Pandora's box in a sector, catering in Italy, which has so far boasted a solid history of widespread compliance with the rules on hygiene and food safety. And yet it is permeable to infiltration by the underworld, both national and imported.

'All you can eat '  or shortage of inspectors, what's the real problem?

The ethnic restaurants  - the so-called  All you can eat, in particular - were found to be irregular in 48% of cases. The NAS challenged 477 violations of the law, imposed fines of 411 thousand euros, denounced 23 operators and closed 22 businesses.

The Minister of Health  Giulia Grillo intervened with an almost frivolous comment. 'Ethnic cuisines are welcome, everyone likes sushi, but 'all you can eat' cannot rhyme with the risk of food poisoning, the rules apply to everyone. Citizens' health is not put at risk with illegal practices to keep prices down'.

If anything, it should explain, the minister, because half of the premises that the NAS unexpectedly inspected were found to be irregular. Where were the ASLs, competent to issue the authorizations - after verifying the compliance of the premises, equipment and procedures with the hygienic-sanitary requirements - and the ordinary checks?

The problem, known to operators in the sector but ignored by the general press, is that most of the health inspectors are retiring and their jobs are being extinguished. The public finances will benefit, but not the employment of deserving young people nor the level of protection of food security in Italy.

Nothing personal  towards the minister, of course. This phenomenon too, like other misfortunes in the country, began under a previous government of a different color. And in the democratic alternation of inefficiencies and frivolities we can only pay tribute, once again, to the Meritorious.

Thanks to the weapon  of the Carabinieri by all of us, then! With encouragement to carry on his valuable work too on the allergen front, little and badly declared even in bars and public establishments, as well as in restaurants (ethnic and Italic).

Notes
(1) Source: Report of the Internal Affairs Commission of the Chamber of Deputies in Government, 24.6.1865