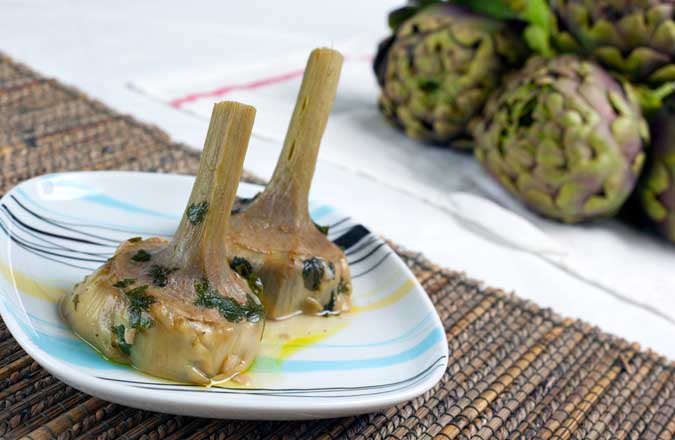 Artichokes alla romana, as can be guessed from the name, is a typical side-dish of Rome and the Lazio countryside, where the vegetable has been eaten since Ancient Roman times. Of all the artichoke recipes, whether stuffed or not, two of the most famous throughout Italy are: stuffed artichokes alla romana and, a dish of Jewish origin, artichokes alla giudia.

Some food historians consider the former to be a descendent of the latter, alla giudia, underlining the origins of both in the ghetto of the capital. There is certainly a link between the country and the humble “cucina povera” style of cooking: those who worked the land ate whatever nature gave them, in this case, the delicious “mammole“, as a local variety of artichoke is called.

Simple recipes with a minimal average calorific content (about 50 kcal per 100g), but with a strong presence in the customs of the city. If you would like to try your hand, take artichokes, breadcrumbs, parsley, garlic, oil, a lemon and mint. Carefully clean each artichoke, fill with the stuffing mix, and sear in a non-stick pan. Add enough water to come halfway up the stalks and cover. The secret is in making sure the leaves are well filled, and in keeping the heat low.